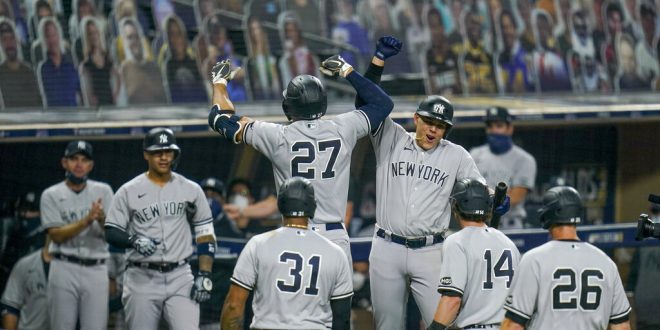 Stanton and Yankees top Rays in Game One of ALDS

The New York Yankees looked dominant at the plate in their Game 1 AL Division Series win, 9-3, over the Tampa Bay Rays.

Game 1 looked more like a home run derby with both teams combing for six home runs. The Yankees recorded four home runs, capped off by a grand slam from Giancarlo Stanton in the ninth inning.

The Yankees struck first. In the top of first, Aaron Hicks hit a sacrifice fly that brought DJ LeMahieu in for the run. Tampa Bay responded in the bottom of the first with a home run from outfielder Randy Arozarena, tying the game 1-1.

New York hit their first home run of the night in the top of the third. Outfielder Clint Frazier sailed one to left field putting the Yankees up 2-1.

The Rays’ Ji-Man Choi gave Tampa Bay their first lead of the night. A home run to center field advanced Arozarena home to put the Rays up 3-2. Choi led the Rays with two RBIs on the night.

The top of the fifth marked the beginning of the Yankees take over.

Catcher Kyle Higashioka tied the game, 3-3, with a home run to left field. Aaron Judge put the ball in the same spot with another home run that gave the Yankees a 4-3 lead.

After three scoreless innings, Stanton sealed the Yankees victory in the top of the ninth. Hicks kicked off the ninth inning with a single to right-center bringing in Higashioka for the score, 5-3.

Hicks leads all New York hitters, going three of four at the plate with two RBIs.

Stanton went one of four at the plate while recording four RBIs for New York.

The Yankees and Rays return to the field tonight for a Game 2 matchup. The first pitch is set for tonight at 8:10 p.m.

You can listen to live coverage of tonight’s AL Division League game on ESPN Gainesville 98.1 FM/850 AM WRUF.