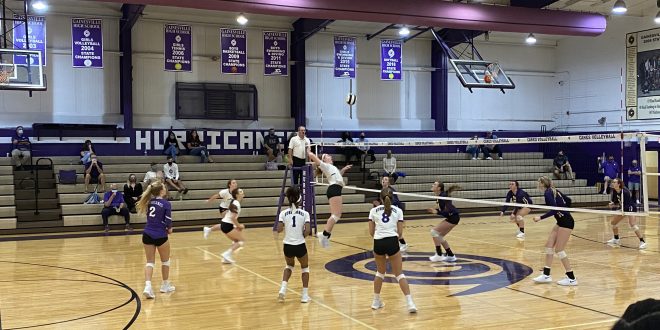 Jayden Tompkins goes in for a kill against the Bell Bulldogs. (Image from Kaitlyn Wadulack)

Hurricanes Volleyball Sweeps the Bulldogs in a Thrilling Match

The Gainesville Hurricanes start off the week strong with a win against the Bell Bulldogs Monday night.

The Hurricanes (11-5) swept the Bulldogs (15-4) in an exciting match that left fans on the edge of their seats.

Hurricanes Set the Tone for the Match in the First Set

Although the Bulldogs scored the first point of the set with an ace by junior setter Emma Hutto, the Hurricanes took the lead with a kill by sophomore middle blocker Ta’Niya Walker and two consecutive aces by senior defensive specialist Meagan Messick. Gainesville kept the pressure on with hits by senior setter Morgan Spear and senior middle blocker Jayden Tompkins, an ace by junior libero Nicole Brandt, and a kill by freshman defensive specialist Meme Davis. This left the score at 9-2.

The Bulldogs fought hard to catch up, and a kill by senior libero Melonie Piechucki gave the Bulldogs a rush of momentum. Two aces by sophomore middle hitter Ashlee Thomas and a block plus an ace by junior middle hitter Michelle Heilig got the Bulldogs close to tying the set. The Hurricanes, however, did not let the Bulldogs take the lead. With one kill each for Tompkins, senior opposite hitter Rori Becker and freshman outside hitter and middle blocker Charlotte Gravlee; one ace by Brandt and two aces by freshman setter and defensive specialist Rylan Hauptman; and two hits by sophomore outside hitter Jasmine Verbust, the Hurricanes offense dominated. The Hurricanes won the first set 25-18.

Both teams took turns taking the lead at the start of the second set. The Hurricanes scored first with an ace by Spear, but three out-of-bound hits by Gainesville left the Bulldogs up 3-1. Gainesville quickly seized their lead back, with a kill by both Davis and freshman outside hitter and opposite hitter Brinkley Kinsell, a quick hit by Spear, and an ace by Brandt. Hurricanes were up 7-6.

With that, the Hurricanes began to take back their lead. Coming out of the timeout, Davis scored a point for her team with a kill. Following up, Walker scored with a hit, Gravlee with a kill, and Brandt with two more aces. A double touch violation on Gainesville gave the Bulldogs a second opportunity to tie up the game, but three blocks and one kill by Tompkins shut down the Bulldogs chance at victory. At set point, Walker scored with a kill. The final score at the end of the second set was 25-20 Hurricanes.

Hurricanes Focus on Discipline Wins Them the Match

Before the third set began, Coach Vice stressed the importance of discipline to her team.

This held true for the team in the third set. Even with a slow start leaving Gainesville down eight points after net violations, missed hits, a block by Heilig, and an ace by Hutto, the Hurricanes focused on the basics to lead them to victory. In the third set alone, Tompkins scored with a total of three kills, two hits, and one block; Hauptman scored with two more aces; and Davis had eight service points, three of them being aces.

To finish off the match, Davis and Gravlee each scored with a kill, Messick scored with an ace, and the setpoint was scored once again by Walker with a block. The Hurricanes won 25-18.

The Hurricanes will face the Buchholz Bobcats in a conference home game on October 8 at 6:30 p.m.

Kaitlyn Wadulack is a third-year journalism student specializing in sports and media at the University of Florida. You can reach Kaitlyn at k.wadulack@ufl.edu
Previous Aaron Rodgers and Packers face Falcons for Monday Night Football
Next Green Bay Packers Earn 30-16 Victory Over Atlanta Falcons