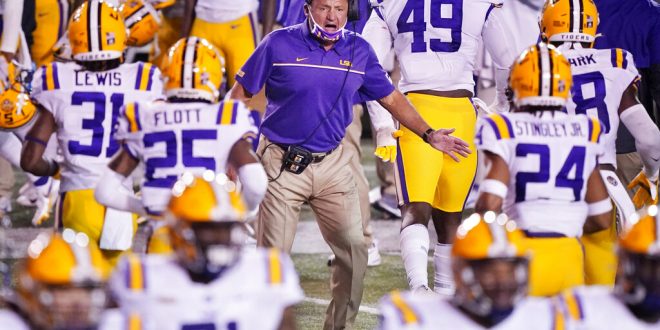 Missouri and LSU will square off this Saturday in a battle of SEC Tigers. It was originally going to be an LSU home game, but has been moved to Missouri due to Hurricane Delta.

Losing a shootout to Mississippi State was obviously not how LSU envisioned starting out the year as defending champs.

They bounced back in week 2 though, and Coach O feels like they can build off of the 41-7 win at Vanderbilt. “We saw a tremendous improvement on this team from week 1 to week 2,” he said.

The Tigers lost the vast majority of starters from last year’s team, either to the draft or opt-outs. Orgeron realized that getting younger guys up to speed is crucial to LSU’s success.

“We’re learning how to gel together. This is a new team, and we’re going to take it one day at a time,” he said of his 2020 squad.

One thing LSU has under its belt this season that Missouri does not? A win.

First-year head coach Eli Drinkwitz’s team is off to an 0-2 start, losing to Alabama and Tennessee by an average of 21 points.

Coming into Saturday’s game against a third-straight ranked opponent, Drinkwitz knows that another unique challenge awaits his Tigers. “They present challenges all over the football field,” he said and pointed specifically toward LSU cornerback Derek Stingley as someone who affects the game plan. Drinkwitz knows that his team needs to establish an effective passing attack if they have any chance of pulling off the upset.

Missouri hopes that redshirt freshman Connor Bazelak, who will be making his second career start, is the answer at quarterback. Though Missouri lost 35-12 last week at Tennessee, the offense showed some life after Bazelak was inserted into the game.

Though the game being moved from Baton Rouge to Columbia seems like a major win for Missouri, Drinkwitz’s team is more focused on the X’s and O’s for Saturday:

The first-year coach wants nothing more than to notch his first SEC win on Saturday, against last year’s national champion nonetheless.