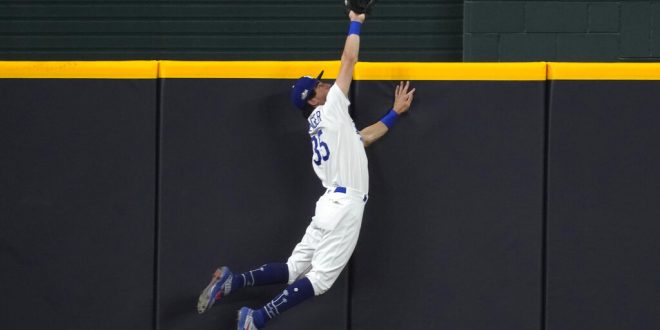 Los Angeles Dodgers' Cody Bellinger slams into the outfield wall and makes the catch as he robs San Diego Padres' Fernando Tatis Jr. of a home run on a deep drive during the seventh inning in Game 2 of a baseball National League Division Series Wednesday, Oct. 7, 2020, in Arlington, Texas. (AP Photo/Tony Gutierrez)

The Los Angeles Dodgers survived a late run from the San Diego Padres in Game 2 of the NLDS Wednesday night, winning 6-5 and taking a commanding 2-0 series lead.

With one more win, the Dodgers will move on to the NLCS, where they will face the winner of the Braves versus Marlins series.

The Padres struck first in Game 2 with a RBI double from Wil Myers to take an early 1-0 lead. The Dodgers retaliated in the third inning, tacking three runs on to take a 3-1 lead.

Cody Bellinger was able to extend the lead for the Dodgers with a solo homer in the fourth inning.

The Padres remained quiet until the sixth inning, when Manny Machado and Eric Hosmer hit back-to-back home runs off Clayton Kershaw to come within one, making it a 4-3 game.

Fernando Tatis Jr. tried to tie the game for the Padres in the seventh inning, but was robbed of a solo home run from a beautiful play by Bellinger in deep center field.

Bellinger’s magnificent catch sent it to the bottom of the seventh inning, where the Dodgers added more runs. A sacrifice fly from Justin Turner and a RBI single from Max Muncy put the Dodgers’ lead at 6-3.

A scoreless eighth inning left the Padres with one more chance to come back, and they displayed a valiant effort. Pinch hitter Mitch Moreland smacked a RBI double off Dodgers reliever Kenley Jansen, cutting the Dodgers’ lead to 6-4.

Austin Nola fouled out to the catcher following the double, leaving the Padres with two outs and Moreland on second.

In the next at bat, Trent Grisham took a full count before singling to deep right center, sending Moreland home. The Padres were down by one with the tying run on first.

The ninth-inning push from the Padres was enough for Dodgers skipper Dave Roberts to bench Jansen in favor of reliever Joe Kelly. With one more out to go, Kelly walked Tatis Jr. and Machado on back-to-back at bats.

Hosmer approached the plate with two outs and the bases loaded, hoping to even the series at one game each. Hosmer grounded out to second, unable to cap off the comeback. Kelly got the save and the Dodgers escaped a close one 6-5.

Bellinger displayed his skills as both an offensive and defensive weapon against the Padres in Game 2. Bellinger hit a solo home run in the fourth inning and robbed Fernando Tatis Jr. of a game-tying home run in the seventh inning.

A known playmaker for the Dodgers, Bellinger has been quiet in the postseason until Game 2. His home run Wednesday night is his first in four postseason games, and he has batted in only one other run besides the homer. But once Bellinger gets into a rhythm, it is hard to slow him down. A key contributor for the Dodgers moving forward, he will look to stay in rhythm after a terrific game.

Game 3 of the NLDS between the Dodgers and Padres is scheduled for Thursday night. The first pitch for Game 3 is at 9:08 p.m. EST.

The Dodgers will go for the sweep as they try to make it to the NLCS after being knocked out early by the Nationals last year.

The Padres, hoping to stay alive in the series, will need three consecutive victories to advance to the NLCS.

Previous Oakland Athletics Are Down But Not Out
Next Arkansas looks for upset on the road against No. 13 Auburn