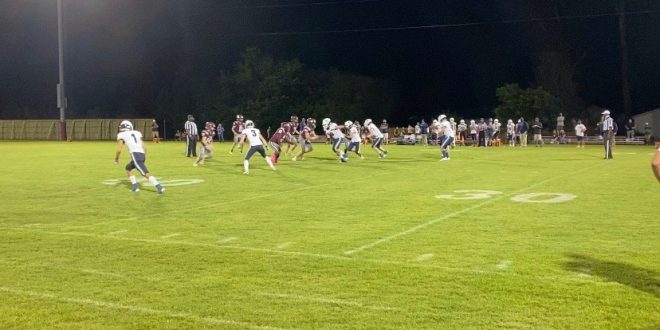 As usual, led by Andrew Pickens, Carter Coleman and Jalen Scott, the Oak Hall offense dominated on the ground.  Pickens added three touchdowns to his season stats with Coleman and Scott not far behind both adding two.  This is not the first instance of success we’ve seen from this trio. Lastly, to close the game, James Parker punched in a rushing score.  The Eagles are starting to develop a punishing reputation on the ground.

Interestingly, the Eagle’s only area of struggle was with their one- and two-point conversions.  Throughout the year, the team has frequently stalled on these plays.  To try and compensate, Coach RJ Fuhr made a minor systematic change and started occasionally bringing in the jumbo package on conversion attempts.

Specifically, Fuhr brought in center A.J. Taylor, 6’4” 340 pounds, and put him in at quarterback. Taylor ran quite a few draws and even once attempted a pass that fell incomplete. However, for Coach Fuhr and company, the new strategy did not go as planned, and point-after-conversions must still be worked on.

When asked about the decision to utilize the jumbo team, Fuhr said “We’ve been struggling on our two-point conversions, so we thought [we could put] a bigger guy [at quarterback], but unfortunately he’s a center.  It’s supposed to be a wedge and he is running outside; he thinks he is a running back.  It didn’t really work like we planned.” While the lack of efficiency on conversions has yet to be problematic, it is definitely something to keep an eye on moving forward.

Defensively, it was more of the same for the Eagles. Oak Hall had no problem stopping the Wildcats, holding them to a mere eight points.  Shockingly, the star of the defense was freshman Carter Dykes who, in a breakout game, had two timely interceptions.

Additionally, defensive end Dylan Povencher applied the pressure and delivered forceful hits to the opposing quarterback, Jalen Brown, all night.  By the end of the game, Brown appeared both defeated and lethargic.  Although the Oak Hall offense has stolen the spotlight, the defense deserves plenty of credit.

Eyes on the Future

The Eagles consistently harp on remaining humble, but it’s difficult to avoid looking ahead into the future. Now at 5-0, a state championship is well within their sights. Each week, no matter the difficulty of the test, they have answered the call with ease. The Oak Hall Eagles are a force to be reckoned with.

William Silverman is a sophomore at the University of Florida from Philadelphia who is interested in pursuing a career in communications and journalism.
Previous Undefeated No More: Bradford First Team to Beat Hawthorne
Next Trenton Pulls Away in Second Half to Defeat Rival Chiefland 33–15