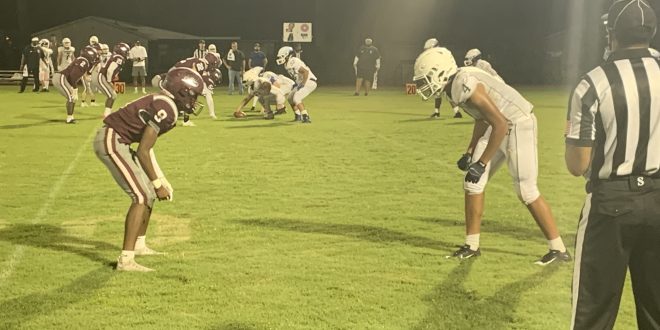 Boasting an undefeated record, the Oak Hall Eagles entered their home game on Wednesday, Sept. 30 against the City of Life Christian Academy Warriors with their perfect record on the line. Featuring the three-headed backfield of senior Andrew Pickens, junior Carter Coleman, and sophomore Jalen Scott, the Eagles rolled past the Warriors, winning the mid-week matchup 64-6.

The Eagles’ offense started the game off with two touchdown runs from Coleman on back-to-back drives. His combination of strength and speed carried him to another couple of touchdowns in the first half, ending with four touchdowns on the day. Despite his dominant performance, Coleman was quick to give credit to the rest of his team.

“They [his teammates] push me to my best potential,” Coleman said. “I can count on all these guys out here, and all these touchdowns wouldn’t mean anything if they didn’t help me.”

Coleman made sure to give specific credit to his offensive line, and for good reason; the Warriors were unable to get to the running backs in the backfield, allowing Coleman, Scott and Pickens to get a head of steam down the field and make big plays.

“It’s insane,” Coleman said. “One of our only senior linemen is in concussion protocol, so the guys out there are super young. They’re just super insane, they’re great.”

From a defensive perspective, the team also successfully contained City of Life’s passing attack, allowing only one significant run that led to the lone touchdown for the Warriors. However, as a defensive-minded play-caller, Head Coach RJ Fuhr always sees room for improvement on that side of the football.

”I kind of wish we got a little more pass rush,” Fuhr said. “A team like Academy of the Lakes slings it, and their quarterback is really good. He’s a senior, so I’d like for us to get a little more pressure without having to blitz.”

The team Fuhr mentioned, Academy of the Lakes, is their next opponent. That game will decide the winner of their division, but Team Captain Pickens believes that this team has bigger aspirations.

With the Eagles playing as well as they are, a state championship run very well may be in Oak Hall’s future. Regardless Fuhr wants to stay focused on the next game and keep preaching consistency.

Carson Cashion is a second-year student at the University of Florida, and has a major in journalism with a specialization in sports and media. Originally from the Orlando area, Cashion has covered the UF Gymnastics team as well as Oak Hall athletics for ESPN Gainesville.
Previous Lakers Stun the Heat in Game 1
Next Hurricanes volleyball gain their tenth win after close sets against the Lions