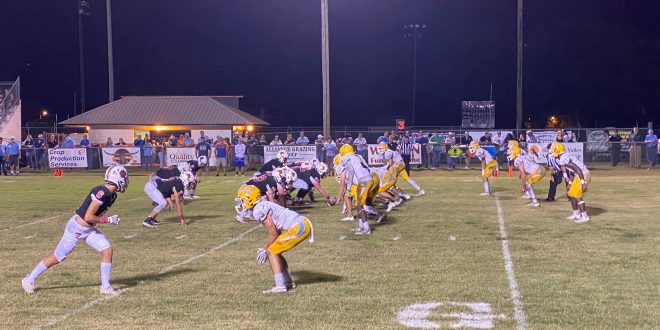 The Trenton Tigers on third and goal before a second touchdown by Julius Johnson in the fourth quarter. (Image from Kaitlyn Wadulack)

The Trenton Tigers (2-4) defeated the Chiefland Indians (1-3) in a rivalry conference matchup.

Although both teams had a slow start in the first half, the Tiger’s offense came out strong scoring 21 of their 33 points in the second half.

Scoreless First Quarter to Trenton Lead in First Half

At the start of the first quarter, sophomore quarterback Brett Nettles made the first offensive play for the Indians with a 12-yard run for a first down. Nettles tried to make something happen offensively on the Indian’s open drive but struggled to find open receivers and complete passes.

The Indians punted and left the ball for the Tigers on the Tigers’ own 20-yard line. Trenton had a similar start to their first drive, with a 9-yard run by senior quarterback Jacob Guthrie to give Trenton a first down. Just as the Indians did, the Tigers turned the ball over on fourth down. At the end of the first quarter, both teams were scoreless.

Trenton wasted no time with this advantage, and junior running back Julius Johnson scored his first touchdown of the night. Even with a missed two-point conversion, the Tigers still led the Indians 6-0 with 8:34 left in the second.

The Indians tried to come back to tie up the game, but the Tigers defense was no match for Chiefland. After a ten-yard holding penalty was called against the Indians, Trenton shut down all pass attempts by Nettles on Cheifland’s second and third down.

The Indians were forced to punt. Junior safety Tyler Perry received the ball and returned it to the endzone for a Tigers’ 90-yard touchdown. After a second failed two-point conversion, the Tigers were up 12-0 with 5:45 remaining before the end of the first half.

The Indians were close to scoring at the end of the second quarter, but on fourth and goal with 21 seconds left, Chiefland fumbled the ball. Tigers freshman defensive tackle Nathaniel Dumas recovered the ball, leaving the Indians scoreless at the end of the half. At halftime, the score remained 12-0 Tigers.

Trenton Dominates Offensively in the Second Half

Coming out of the locker room in the second half, the Tigers were set to receive. The Indians fooled the Tigers and opted to onside kick to begin the half. The aggressiveness from the Indians worked, as they recovered the ball at midfield. The Indians took advantage of the field position, scoring on fullback Lawrence Rivers’ one-yard touchdown. The touchdown cut the Indian’s deficit to four points, trailing 12–8.

“We needed to challenge ourselves,” said Head Coach John Palmer. “We had a little spark there and had a chance to make a run, but we just made too many mistakes.”

However, the Indians did not go down without a fight. With eight minutes remaining in the fourth quarter, Nettles sneaked his way in for a one-yard touchdown. This cut the Indian deficit to ten points, 25–15.  Still, the Indian defense was no match for the Tiger offense, with Johnson sealing the game for the Tigers on a one-yard touchdown run, his second total touchdown in the game. This score put the Indians away, leaving a score of 33–15 as the final whistle blew.

“I think Trenton is an improving team,” said Coach Palmer. “I think that’ll help us down the road anytime you lose to a quality opponent. We’ll start over and look at the film and we’ll hopefully end up growing from this.”

The Indians will next take on Hamilton County (1–4) Friday, October 16 at 7 p.m. at home to celebrate senior night.

Kaitlyn Wadulack is a second-year Journalism student specializing in Sports and Media at the University of Florida. You can reach Kaitlyn at k.wadulack@ufl.edu.
Previous Oak Hall Tramples Academy at the Lakes, Remains Undefeated
Next Gators Pick Up First Loss at Texas A&M