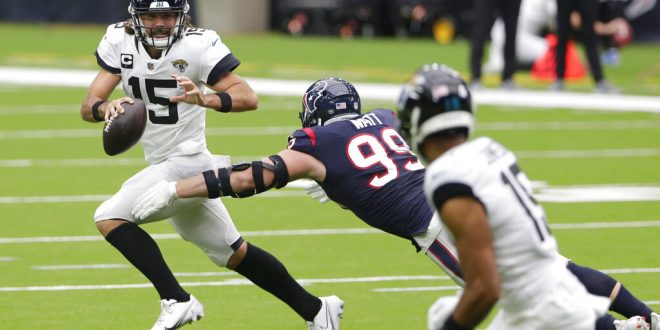 It is week six of the NFL season and the Jaguars are 1-4.

After upsetting the Colts in week one of the season, the Jaguars have lost four straight games. This is their worst start to a season since 2015. That year they finished with a record of 5-11. If head coach Doug Marrone and general manager David Caldwell want to stick around another season, they will need to set things right.

In all four of their losses this season, the Jaguars have failed to capitalize on key opportunities.

On Sunday, they had many opportunities to get ahead against the Texans. Sidney Jones snagged an interception and tipped another to Jarrod Wilson. Both times the Jaguars offense had excellent field position but wasted the opportunity. After Wilson’s interception, they had a chance to score and fumbled the ball instead.

The Jacksonville offense showed flashes of excellence but squandered the opportunities given to them by the defense and special teams. The red zone fumble as well another lost fumble brings the team’s turnover total to seven on the season.

Sunday is just one example of their shortcomings. They had many other opportunities in their other losses as well, all with a common theme. Inconsistency.

Throughout the season so far the Jaguars struggle to play as a team. One week the offense performs well and the other side of the ball is lackluster. Sunday the defense showed up more than usual, but the offense was playing catchup all game.

Coach Marrone looks to turn this around, speaking to the media about being more consistent and putting everything together.

Important among these changes is taking advantage of offensive opportunities and having more success in the red zone. The two fumbles Sunday cost the team multiple chances to score and pull ahead. Marrone adds that the team could be doing more to give themselves a chance to win these games.

The issues of inconsistency are not in individual effort. Marrone believes that the key to being more consistent is good coaching and practice as well as taking advantage of their in-game opportunities.

Despite the shortcomings, there is hope for the Jaguars. They have playmakers and talented players. One such player being quarterback Garner Minshew II. He has thrown 10 touchdowns this season and has shown his potential to be the team’s franchise quarterback.

The Jaguars have talent at an individual level. Now it is just a matter of playing consistently as a team in all aspects of the game.

Jacksonville will have another chance to set things right next Sunday when they face the Lions. If they cannot find a way to fix their issues, 2020 might start looking a lot like 2015.