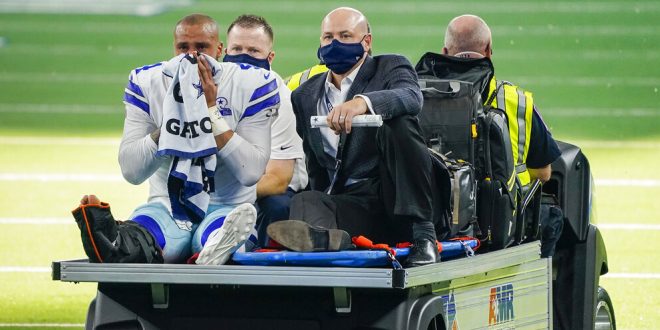 Dallas Cowboys quarterback Dak Prescott leaves the field on a cart after beig injured on a tackle by New York Giants cornerback Logan Ryan during the third quarter of an NFL football game on Sunday, Oct. 11, 2020, in Arlington. Prescott was injured o the play when Ryan came down on his right leg and left the game. (Smiley N. Pool/The Dallas Morning News via AP)

With 11 games remaining for the Cowboys Head Coach, Mike McCarthy turns to Andy Dalton for the starting position.

Sunday night’s game was intense. The Cowboys secured a 4-point lead over the New York Giants heading into half time. Less than 7 minutes were remaining in the 3rd half when Prescott fell to a season-ending injury.

The starting quarterback leaves week 5 with a dislocation and compound fracture to his right ankle.

After undergoing successful surgery, Head Coach McCarthy says Prescott will miss out on the rest of the season. Prescott, who has never missed a game in his five-year career, ends the final year of his contract on a terrible note. Despite this, fans and athletes have sent many prayers and wish Prescott a speedy recovery.

The Dallas Cowboys took no time to replace injured Prescott with Andy Dalton.

The 6’2, Texas Christian University alumni was drafted by the Cincinnati Bengals in 2011 during the second round of the draft. Dalton played 9 seasons with the Bengals and was positioned as starting quarterback since he was drafted.

Dalton is a 10 year NFL veteran and is no rookie to the starting quarterback position. He says he is and has been ready for this moment.

The Dallas Cowboys have 11 games remaining in the season. They currently dominate the NFC East in the first place position. Having secured the win over the Giants, 37-34, Cowboys fans will have to wait till next Monday to see how Dalton shows up for the team.