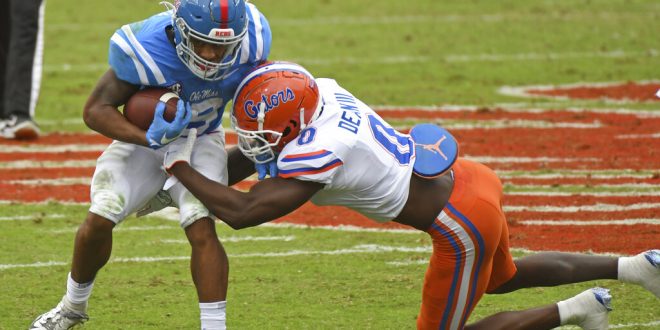 Looking at the Gators’ Defense

The Florida Gators finally have the high-powered offense they have been waiting for. But it has come at a cost. Florida’s defense has struggled in all three games so far this season.

According to Pro Football Focus, Florida leads the nation by scoring on 70% of its offensive drives. The team cannot rely on an elite offense to carry them, however. This was shown Saturday in a 41-38 loss to the Texas A&M Aggies, a team Florida was favored to beat by six points. The Aggies were the first ranked team the Gators faced this year.

The Gators have shown an inability to get off the field on third downs. They gave up 12/13 third-down conversions against the Aggies, a 49.39% rate. That is no. 58 in the country.

Against the Gamecocks, Florida allowed head coach Will Muschamp‘s offense to convert on fourth down six of seven times.

This is not a good look for Florida.

According to redshirt junior defensive tackle Zachary Carter, it comes down to taking responsibility.

It should be noted that the Gators’ defense was without several key defenders against Texas A&M, including defensive lineman Kyree Campbell, who has yet to suit up this season and also defensive end/linebacker Khris Bogle.

Following the loss against the Aggies, Mullen said he needed to “reevaluate” the defensive side of the ball.

Grantham’s unit is led by veterans Marco Wilson, Donovan Stiner, Zachary Carter, but it doesn’t look like it. Florida has given up 100-plus points this season.

Carter has transitioned into a slightly different role this season. He has been playing a lot more inside coverage than he is used to. He said the coaches, especially defensive line coach David Turner, have believed in his abilities.

Can the Gators’ defense only go up from here?

Although Florida did shut down football activities Tuesday, following news of a coronavirus outbreak, the team’s matchup against LSU Saturday has yet to be canceled.  LSU has put up 41 points in each of its’ last two games.

If all goes as planned and the two teams meet, the Gators’ defense will be put to yet another test.

Maddie Schmidt's goal is to become a college football reporter. Be sure to check out her sports blog, mygamedaygal.com.
@@maddieschmidt15
Previous Rays Win Game 3 in the ALCS Against the Astros
Next Atlanta Braves beat LA Dodgers 8-7