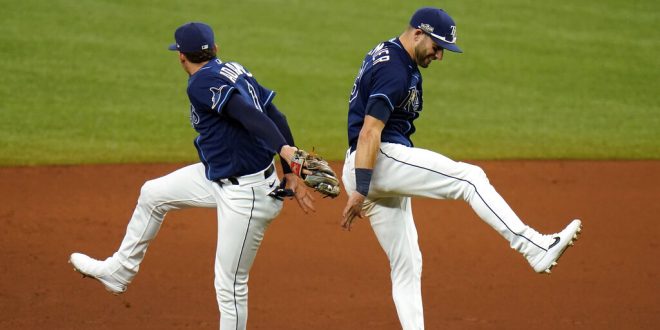 Rays Win Game 3 in the ALCS Against the Astros

Tensions are high going into game four of the ALCS after the Rays secure a 3-0 lead in the series. In their game against the Astros on Tuesday, the Rays beat the Huston team 5-2.

Houston came out swinging early, when José Altuve homered over the leftfield wall in the bottom of the first. The score remained 1-0 until the top of the sixth, when the Rays put some points on the board.

Joey Wendle helped take back the game for the Rays after singling to left field, allowing for Randy Arozarena and Brandon Lowe to score. This hit sent Yandy Diaz to second. Enoli Paredes, later, hit Willy Adames with a pitch that brought Diaz home. Up 3-1, Hunter Renfroe stepped up to the plate for the Rays. A double to right allowed Wendle and Kevin Kiermaier to score. This ended the Rays’ scoring for the inning and the night, leading 5-1.

In the bottom of the sixth, Michael Brantley homered off of Ryan Yarbrough, making the score 5-2, where it remained for the rest of the game.

Yarbrough started for the Rays for the first time since Sept. 20. This also served as the 28-year-old’s first career postseason start. He gave up the first run of the game in the first inning on his eighth pitch. He was pulled in the bottom of the sixth after Brantley’s home run, and the Rays went through five relievers during the game afterward. Diego Castillo finished the game for the team, but Pete Fairbanks, John Curtiss, Ryan Thompson and Aaron Loup also made appearances on the mound. Altogether, the Rays gave up seven hits while the Astros’ gave up eight.

José Urquidy was named the starting pitcher for the Astros for game three as opposed to Zack Greinke. Greinke came down with some arm soreness that caused Urquidy to get the starting spot in Houston’s game three loss to the A’s in the AL Division Series. Urquidy pitched into the top of the sixth inning. He was pulled after a groundball hit by Lowe put two men on base. Paredes then came in to pitch for the Astros. While he was on the mound, the Rays put up their first three scores of the game. In an effort to stop the bleeding, Brooks Raley replaced Paredes pitching. However, the bases were loaded when he entered the game and on his fifth pitch, Renfroe had a double to right field that brought the game to 5-1. Blake Taylor and Josh James also made appearances on the mound for Houston during the remainder of the game.

For the Astros, defense has struggled, particularly with second baseman, José Altuve. During the sixth inning, Altuve had a throwing error that sent the ball into left field instead of his target at second base. This interrupted a potential double play for the Astros that could have prevented Arozarena and Lowe from scoring. This came after another throwing error during game two that opened the gates for Manuel Margot‘s three-run homer.

The Rays on the other hand have been capitalizing on defense during this postseason. In the first inning of game three, Kiermaier made a jumping catch in centerfield that prevented a home run for the Astros that would have put them up 2-0. He then had a diving catch to end the third inning while two men were on base. This along with a diving catch made by Renfroe in the bottom of the seventh and a stop made by Adames in the fifth prevented major scoring opportunities for Houston.

Arozarena went three for four in game three with a double and a walk. Game three marked his fourth three-hit game in the postseason. This has made him the first rookie to ever achieve this in one postseason. Overall, he is now the fifth player to ever accomplish this.

While his defense has been off, Altuve has been capitalizing at the plate. In the 59 postseason games that he has played, Altuve has had 17 home runs. Only 11 players have ever reached this many. Game three was also his second time in the series to begin the scoring.

The Rays and the Astros face off again Wednesday, Oct. 14. With a 3-0 record in the series, the Rays could secure their spot in the World Series if they win. Tyler Glasnow was named the starting pitcher for the Rays after three postseason starts that resulted in wins. Greinke is back on the mound for the Astros despite still having some arm discomfort and not playing through the fifth inning in his two playoff starts.

The #Rays are rollin'!

They're one win from reaching the World Series. pic.twitter.com/LnZ6XlneWB

Rylee is a fourth year journalism major with a specialization in sports and media at the University of Florida College of Journalism and Communications.
Previous Cowboys move to Andy Dalton at QB
Next Looking at the Gators’ Defense