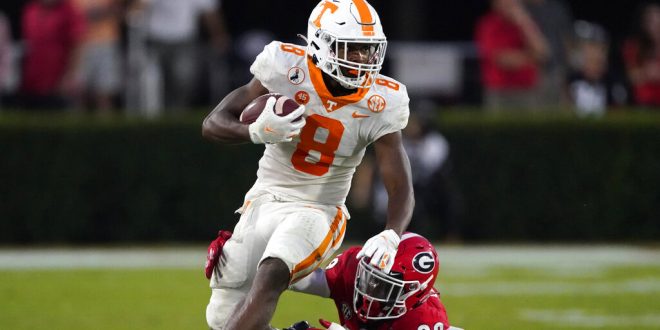 Tennessee running back Ty Chandler (8) break away from Georgia defensive back Christopher Smith (29) after a catch in the second half of an NCAA football game Saturday, Oct. 10, 2020, in Athens, Ga. (AP Photo/John Bazemore)

Kentucky Squares off with Tennessee in SEC East Duel

With COVID-19 outbreaks forcing the postponement of multiple SEC football games, this week has been anything but predictable. As it currently stands, the Kentucky Wildcats will battle with the Tennessee Volunteers at noon on Saturday. The matchup of SEC East foes will go a long way in how division shapes up.

The Wildcats (1-2) come into the game on the heels of their first win of the season — a defensive masterpiece in which they took down Mike Leach’s Bulldogs, 24-2. The Vols (2-1) are coming off a disappointing 44-21 loss. After leading 21-17 in the first half, Tennessee gave up 27 unanswered second-half points.

Coaches Mark Stoops and Jeremy Pruitt are both preparing their teams for a close matchup of capable SEC East teams. Will that be the reality, though? There are a number of key matchups and facets of each team’s game that will determine the answer.

The Wildcats’ 24-2 victory over Mississippi State was bolstered by an excellent performance on the defensive side of the ball. Kentucky’s defense intercepted K.J. Costello four times and backup quarterback Will Rogers twice, one of which was a pick-six.

Although the Bulldogs offense threw 70 passes in Leach’s air raid offense, they were unable to score the whole game. Their only points came off a safety in the third quarter. Coach Stoops was proud of how his defense forced turnovers, but also how efficient they were in breaking up plays.

Although the Bulldogs put up 295 total yards in the game, they only averaged 3.51 yards per play.

This Kentucky defense will look to create more turnovers against an offense led by Jarrett Guarantano, who turned the ball over three times in the second half alone against Georgia. So, how will that Volunteer offense operate on Saturday?

Are the Pieces All There for Tennessee?

The Volunteers came into this season with about as much buzz as they’ve had in recent memory. With veteran quarterback Jarrett Guarantano taking snaps and a skilled offensive line, Jeremy Pruitt seemed poised to lead his team to a great season. So, what will they have to play as they did in the first half against Georgia, rather than the second?

An easy answer is to eliminate turnovers. Guarantano fumbled the ball less than a minute into the second half and would end the game with two fumbles and an interception. Georgia scored two field goals off the first two turnovers and got the scoop and score on Guarantano’s second fumble.

When Coach Pruitt was asked about his team’s performance against Georgia, he credited the Bulldogs with dictating a majority of the game.

After their third game, the Volunteers find themselves in the back of the pack in terms of offensive statistics in the SEC. They rank 11th in the conference in total yards and yards per game.

On the defensive side of the ball, linebacker Deandre Johnson leads the SEC with 4 sacks and linebacker Henry To’o To’o ranks 11th in the conference in tackles with 23. Look for a low-scoring bout on Saturday between two teams that are still looking to establish themselves offensively.

Saturday will mark the 116th meeting between these two SEC East foes. Tennessee leads the series 81-25-9 all-time. Mark Stoops and the Wildcats will hope to end their 17-game losing streak at Neyland Stadium, and Jeremy Pruitt will look to get back on track after a difficult loss to Georgia.

Kickoff is at 12 p.m. Saturday on SEC Network.

I'm a third-year student at the University of Florida passionate about storytelling and sportswriting. My goal is to work in communications for a professional sports team after I graduate.
Previous No. 15 Auburn faces South Carolina
Next Cam Newton Returns to Practice for the Patriots and the Falcons Shut Down their Facility