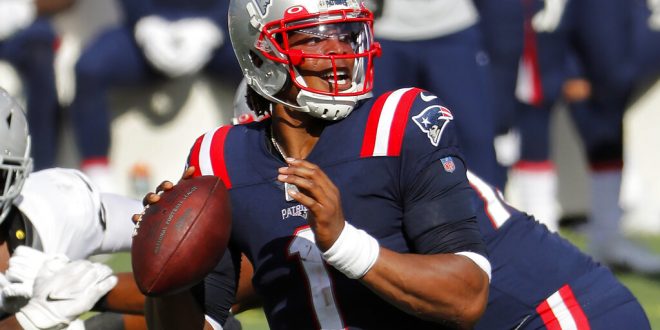 New England Patriots quarterback Cam Newton looks to pass against the Las Vegas Raiders during an NFL football game at Gillette Stadium, Sunday, Sept. 27, 2020 in Foxborough, Mass. Maybe the third time will actually bring a kickoff between for the Denver Broncos and New England Patriots. After having their original Week 5 matchup twice postponed because of a mini outbreak of coronavirus cases on the Patriots that saw four players including quarterback Cam Newton and reigning Defensive Player of the Year Stephon Gilmore test positive, the teams are hopeful they will finally meet this week. (AP Photo/Winslow Townson)

The New England Patriots cleared Cam Newton to return to practice today after testing positive for COVID-19.  Newton sat out in their week 4 loss to the Kansas City Chiefs, but the Patriots are expecting him to start Sunday against the Denver Broncos.

Meanwhile, the Atlanta Falcons shut down their team facility after multiple COVID-19 tests came back positive.  According to CBS Sports, one NFL official and a member of the Falcons’ personnel tested positive for COVID-19.  The Falcons take on the Minnesota Vikings on Sunday in Minnesota.

Newton returning to practice is huge news for the Patriots as backup quarterbacks, Brian Hoyer Jarrett Stidham, struggled against Kansas City.  Hoyer and Stidham combined to go 20/37 for 190 yards and one touchdown and two interceptions.

Along with Newton being a better passer, he also has the scrambling ability to keep opposing defenses on “their toes.”

Newton has a 68% completion percentage with 62 completions on 91 attempts this season.  He has thrown for 714 yards and two touchdowns while adding 149 yards and four touchdowns on the ground.  His dual-threat element that he brings to the table can be a defensive nightmare for opposing teams which makes him tough to defend.  Because of this, he should give the Patriots a boost of morale when they take on the Broncos.

Kickoff is set for 1 p.m. EST on CBS at Gillette Stadium in Foxborough, Massachusetts this Sunday.

Falcons Shut Down Team Facilities Due to COVID-19

Along with an NFL official and a member of the Falcons’ team personnel testing positive for COVID, rookie defensive tackle, Marlon Davidson was placed on the COVID-19 list.  According to Tom Pelissero of the NFL Network, a Falcons assistant coach also tested positive.  The team then decided to operate virtually all day on Thursday as a precaution.

The #Falcons placed Marlon Davidson on the Reserve/COVID-19 list yesterday. If the additional positive result(s) this morning end up being false positives, Atlanta could be back to work as soon as this afternoon. https://t.co/bfTgbcyb3z

The Falcons are not the only team who have been affected by COVID this season.  According to CBS Sports, the Jaguars, Jets, Ravens, Steelers, Patriots, Broncos, Dolphins and Chargers had their schedules altered as well.

The NFL is monitoring this situation with the Falcons closely, but there is still no word as of yet if their game with the Vikings on Sunday will be postponed.  The Falcons are looking for their first win of the season as they take on the Vikings on Fox at 1 p.m. EST. 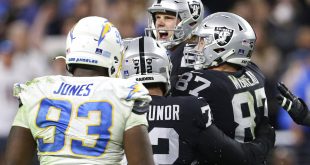 A Look At The AFC Playoff Bracket