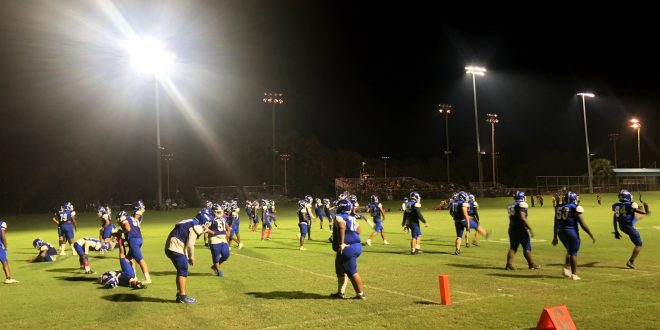 P.K. Yonge warms up for the 2nd half in their 28-6 loss to Bradford. (Photo Credit: Caleb Wiegandt/ESPN Gainesville).

P.K. Yonge fans were given an optimistic start, with Yarnell McCray breaking open the scoring with an electric 30-yard pick-six.

That would be the only time the Blue Wave found the end zone for the night. Class 4A Bradford (3-4) defeated PKY (2-5) 28-6 and continued their victory tour of Gainesville-area high school football on Friday night.

After throwing that interception on an early Tornado drive, quarterback Dae’jon Shanks (8/13, 109 yards, interception) would finish with three passing touchdowns, two to Willie Pollard and one to Austin Lovell.

A 60-yard burst from Eric Smith early in the 2nd quarter rounded out the scoring for Bradford, who scored all 28 of their points unanswered to close out the home team. Smith finished with 105 rushing yards in 10 attempts, leading all rushers in the game.

Tornado defenders sacked quarterback Aaron Small Jr. five times in their win, holding he and the Blue Wave passing attack to some of their worst numbers all season.

Both teams committed their fair share of errors. Bradford committed more turnovers (3), but the Tornado offense made P.K. Yonge pay after both of their costly fumbles.

Immediately after Bradford’s first score, Coach Brian Tomlinson opted for an onside kick, surprising PKY who fumbled the return after it bounced off a Blue Wave player’s chest.

6 plays and 45 yards later, the Tornadoes had marched downfield and capitalized off of the special teams mistake, capping off the drive with Pollard’s first touchdown reception that put Bradford up 16-6.

Later in the half, after Lovell hauled in his touchdown from Shanks, the Blue Wave fumbled on the first play of their drive. It would have lead to another Bradford touchdown had they not fumbled it themselves near the PKY 5-yard line.

Time ran out in the 1st half before the Blue Wave offense could get back downfield, as their trouble putting together consistent drives continued into the 2nd half.

Bradford will look to extend their winning streak to three when they head back home to take on Palatka (0-7).

P.K. Yonge will have to wait to try and break their slump. After an off week next Friday, they will finish their 2020 regular-season home slate against fellow Class 1A school Dixie County (4-2).

Caleb Wiegandt is a first-year Journalism student on the Sports and Media track in the University of Florida's College of Journalism and Communications. He has previous bylines in USA Today, Yahoo Finance, and The Louisville Courier-Journal before arriving at ESPN Gainesville. Caleb is a proud graduate of Holy Cross High School in southwest Louisville, Kentucky, where he was born and raised. You can reach Caleb at cwiegandt@ufl.edu.
@@CalebWiegandt
Previous Hamilton County outlasts Chiefland 28–20 in back-and-forth battle
Next Detroit out runs Jaguars in Lions’ Victory