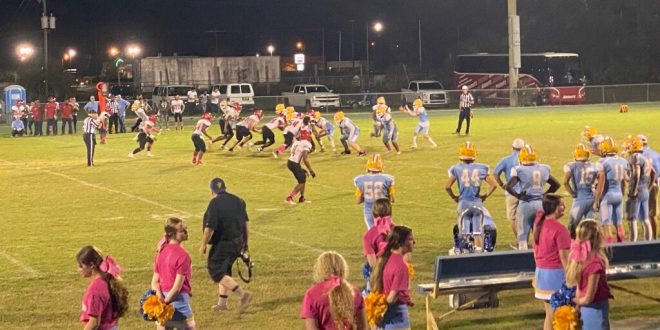 Both teams traded blows throughout the game, but the Trojan defense ultimately was the deciding factor, shutting down the Indians offense in the final minutes of the fourth quarter.

A defensive dominated first half

The Indians quickly came onto the field with momentum, recovering an onside kick on the opening kick-off. However, the Indians were not able to convert on their opening offensive drive.

The Indians struck first when Trojan quarterback Denandre Johnson was picked off by Indians lineman Elijah Flanders, taking the interception 55 yards for the touchdown. The Indians failed to convert their two-point conversion attempt, putting the Indians ahead 6–0 with 1:31 remaining in the first quarter.

Both defenses caused opposing offenses to struggle throughout the second quarter, as both teams could not find the endzone for the first eleven minutes of the quarter. With 30 seconds remaining in the first half, Trojan running back Tyler Whetstone ran in for a 60-yard touchdown run to put the Trojans ahead 7–6 going into halftime.

Trojans Offense Takes Over in the Third

The Trojans controlled the ball for most of the third quarter. The Indians defense struggled with varying penalties, most of which were called on the Trojan’s third downs. On fourth and inches, Whetstone ran in a 10-yard touchdown. This was his second touchdown of the night. The Trojans led 14–6 with 2:29 left in the third.

Chiefland’s offense fought hard in the final minutes of the third. They were able to get a good field position heading into the fourth quarter after a run by wide receiver Mikayl Walker. The score at the end of the third was still 14–6 Trojans.

Back-and-Forth Scoring in the Fourth

Starting off the fourth quarter, the Indians had a first down on the Trojan’s 15-yard line. The Indians offense stepped up, and quarterback Brett Nettles rushed for a two-yard touchdown. The Indians went for a two-point conversion to tie up the game and succeeded thanks to running back Junior Brown. The score was tied 14–14 with 9:19 left in the fourth.

Hamilton County’s response was immediate. Whetstone wasted no time and ran for a second 60-yard touchdown, making it his third touchdown of the game. The Trojans retook the lead 21–14 with 9:00 minutes left.

To no surprise, the Indians offense responded, scoring in less than 20 seconds on another Fisher touchdown, this time from 44 yards out. The Indians attempted a two-point conversion, but fell short, allowing the Trojans to stay ahead, the score now 21–20 with 8:43 left.

“The couple times when adversity hit us, we fought back into the game,” Assitant Coach Cliff Harrell said. “We put ourselves in a position to win the game. In the end, that was one thing I was really proud of….We just came up on the short end there at the end of it, but that adversity continued to hit us and our guys stepped up to the play and fought back, and [I] was real proud of that.”

Trojans Pull Away Late in the Fourth Quarter

Chiefland had a chance to take the lead after Fisher recovered a Trojan fumble. Just as before, however, the Trojans did not give the Indians a chance at redemption. Cornerback Julian Garcia picked off Nettles and returned it for a 60-yard touchdown return. With 43 seconds left, the score was 28-20.

Nettles tried to offensively produce something for his team, but his efforts came up short after Whetstone intercepted the ball. As the final whistle blew, the scoreboard read 28-20 in favor of the Trojans.

“We are going to focus on ourselves,” head coach John Palmer said. “We are not at the point where we can scheme a whole lot and worry about our opponents. We have to correct our mistakes and still get better.”

Up next, Chiefland travels to play Wildwood on Friday, October 23rd at 7:30 pm.