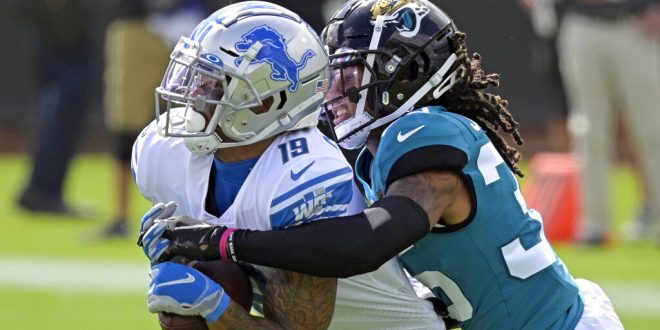 The (2-3) Detroit Lions were more than the (1-5) Jacksonville Jaguars could handle on Sunday afternoon in TIAA Bank Field.

The Lions took a 34-16 victory over the Jaguars.

The Jacksonville defense is no stranger to giving up yardage in the run game. The Jaguars currently rank 26th in the league for rush defense, averaging 98.4 yards per game.

RB @DAndreSwift is now over 1⃣0⃣0⃣ yds on the day!

He becomes the 3rd #Lions player to produce a game with at least 100 rushing yards & 2 TDs within his first 5 career games (via @LionsPR). pic.twitter.com/aSybnjkP06

The Jaguars allowed 180 rushing yards, including 116 from running back D’Andre Swift.

The Lions’ run game took advantage early in the first quarter. Running back Adrian Peterson capped off a 50-yard, 10 play drive with a one-yard run putting the Lions up 7-0.

The Jaguars responded on the following drive with a field goal from kicker Jon Brown. Despite having zero regular season attempts, the Jaguars placed Brown as the starter.

With veteran kicker Josh Lambo placed on injured reserve with a left hip injury, the Jaguars have rotated out a multitude of young kickers.

Brown’s first field goal of his career, a 31-yarder, cut the Detroit lead 7-3.

Lions’ quarterback Matt Stafford and company put up another touchdown, 14-3, with a one-yard run from Swift.

On the following the drive, the Lions’ defense showed up. Safety Duron Harmon picked off Jacksonville quarterback Gardner Minshew II.

Prater returned to the field to extend the Lions’ lead with a 31-yard field goal. The Lions’ held a 17-3 lead heading into the half.

The Jacksonville defense flipped the momentum at the start of the second quarter. Jaguars’ Joe Schobert intercepted Stafford on the Lions’ opening drive.

With the Jaguars unable to put points on the board, the Lions offense took over.

On fourth and goal, Stafford found tight end T.J. Hockenson for the touchdown. The Lions started to pull away with a 24-3 lead.

Minshew II and the Jaguars found some rhythm in the third quarter. A six-yard run from Minshew II gave Jacksonville their first touchdown of the game, 24-10.

The fourth consisted of another display of the Lions’ run game success. Swift found the end zone for his second touchdown of the day.

With a 31-10 the Lions remained in control. Prater scored his second field goal day midway through the fourth to extend the Lions’ lead 34-10.

The Jaguars continued to find some fourth quarter success with a 14-yard touchdown to running back James Robinson from Minshew II. However, it wasn’t enough to top the Lions 34-16 victory.

The Jaguars travel to Los Angeles to take on the Chargers for a Sunday afternoon matchup on Oct. 25.