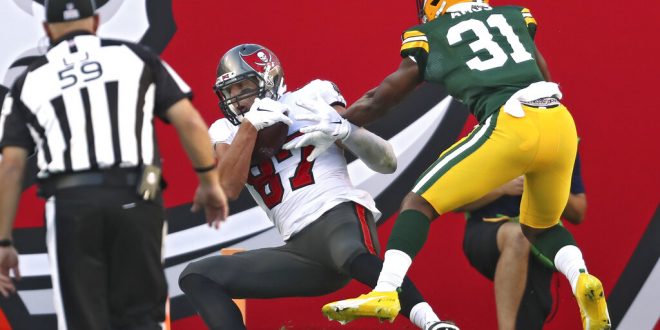 The second-year cornerback out of Auburn jumped Davante Adams’ out route perfectly and intercepted the pass from Green Bay quarterback Aaron Rodgers. Thirty-two yards later, Dean was in the end zone.

Before the Packers knew what hit them, the Bucs blew them out, 38-10.

Dean’s pick-six cut the Green Bay lead to 10-7, but the Tampa Bay defense didn’t stop there. It nearly recorded a second pick-six on its next possession. Mike Edwards intercepted Rodgers for 37 yards and took the ball to the two-yard line.

On the following play, Ronald Jones punched it in for a touchdown. As a result, Tampa Bay held the lead, 14-10.

The defense continued to rattle Rodgers and the Green Bay offense. In addition to its two interceptions, the defense added five sacks and a forced fumble.

Defensive linemen and linebackers were constantly in the backfield. The Bucs stifled the run, hit the quarterback 13 times and had eight tackles for loss.

Once the defense flipped the script, the Tampa Bay offense caught fire. Ronald Jones found the end zone twice and rushed for 113 yards. It was Jones’ third straight game with at least 100 yards on the ground.

Meanwhile, the passing game capped off a 28-point second quarter for the Bucs. Tom Brady connected with Tyler Johnson and Rob Gronkowski for scores. The latter scored his first touchdown as a Buccaneer.

Gronkowski also led the Bucs with 78 yards on five catches. After the game, Brady praised the play of his former New England teammate.

Earlier in the day, Green Bay (4-1) travels to Houston (1-5) Sunday to face Deshaun Watson and the Texans.