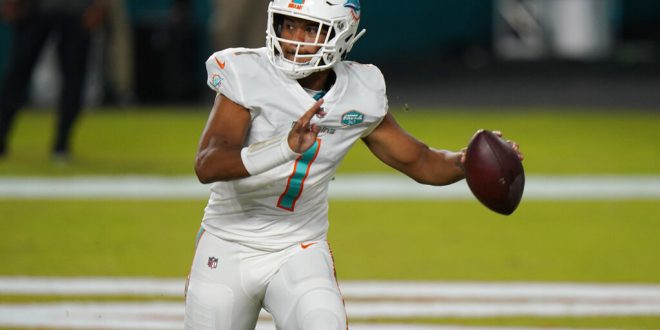 Tua Tagovailoa Relishes in a Chance to Play Again

Tua Tagovailoa made his NFL debut this past Sunday against the New York Jets. The Dolphins secured a 24-0 win not long after Tagovailoa finished the game with his first two complete NFL passes.

As the Dolphins head into a bye week this upcoming weekend, their next appearance during week eight against the Los Angeles Rams will feature a new starting quarterback.

In November 2019, during a matchup against Mississippi State, Tagovailoa ended his college career at the 15-yard line with a gruesome hip injury. With the idea that very few have returned to football after suffering from such an injury, Tagovailoa remained optimistic.

Tagovailoa went 5th overall in the 202o NFL Draft and was cleared to play in July.

Having stood on the sidelines for the past five games, Tagovailoa made headlines after starting quarterback Ryan Fitzpatrick checked out during the game’s final minutes. Entering the game with a little over 2 minutes remaining, Tagovailoa completed 9 yards.

The Dolphins dominated over the New York Jets 24-0.

Not long after the win, Tagovailoa returned to the same 15-yard line where he once thought his football career was over.

Tagovaila relishes the chance to play

Heading into a bye week, Miami has named Tagovaila as the starting quarterback. Miami holds the number two spot in the AFC East, and they are hoping that he will lead them to a franchise win.

“I think the timing is interesting, and people will debate it because the Dolphins were playing well. Ryan Fitzpatrick was playing well. But look Brian Flores, the Dolphins head coach knows what he sees in practice every day and clearly, he feels like the time has come for Tua to step in there and play well.”

Ryan Fitzpatrick has led the Dolphins to two consecutive wins over the past two weeks. Tagovailoa will now step forth as starting quarterback for the Dolphins. They hope to secure a third straight win against the Los Angeles Rams.