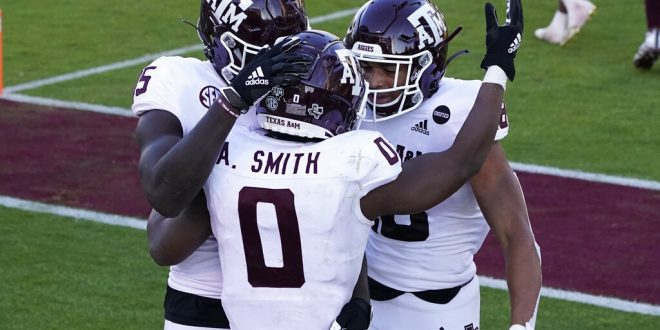 Two games into the season, the outlook for Texas A&M seemed bleak. They squeaked by a Vanderbilt team that should’ve given them no trouble in a 17-12 win. The week following, they traveled to Tuscaloosa to get demolished in a 52-24 blowout.

But after week 2, the Aggies’ fortunes started to change. They came back to College Station and knocked off the No. 4 Florida Gators in a 41-38 barnburner that brought coach Jimbo Fisher his first win against a top-five team in eight tries. The week after, the Aggies broke a 3-game losing streak at Mississippi State.

The Aggies now find themselves ranked No. 7 in the Associated Press Top 25. At 3-1, the Aggies are only ranked behind two other SEC teams: the Crimson Tide (No. 2) and the Bulldogs (No. 4).

The roll Fisher’s Aggies are on right now is especially good for the program since their schedule this season is so front heavy.

Texas A&M doesn’t have a ranked team on their remaining schedule, as of now. While this is much more favorable to playing top-four teams Alabama and Florida in back-to-back teams, they still do have to face six SEC teams.

The “easier” remaining schedule can also be deceiving for teams like Sam Pittman’s Arkansas Razorbacks. The Razorbacks, that finished 2-10 last season, have rattled off victories against Ole Miss and a ranked Mississippi State team. Texas A&M will host the Razorbacks on Oct. 31.

Isaiah Spiller has been excellent in the backfield for the Aggies, averaging 6.72 yards per rush – first in the SEC – and running for 430 yards, second only to Najee Harris in the conference.

In the passing game, however, the Aggie’s receiving core is depleted, especially after the loss of Caleb Chapman for the season. The 6-5 sophomore broke out for nine catches, 151 yards and two touchdowns against Florida, but late in the game, he suffered a season-ending injury.

The Aggies already saw two of their receivers, Quartney Davis and Kendrick Rogers, declare for the NFL Draft and leading receiver Jhamon Ausbon opt-out of the season. So, the loss of Chapman is especially demoralizing.

Tight end Jalen Wydermyer and running back Ainias Smith should be two pass catchers quarterback Kellen Mond continues to look to. Even still, don’t be surprised if a new playmaker emerges after the BYE week.

The quarterback looked good against Alabama, even though the team result was anything but, and excellent against the Gators. But playing against a slumping Mississippi State team, Mond wasn’t spectacular.

Then again, he never had to be spectacular, but it still begs the question; will Mond always be a good quarterback right on the cusp, or will he someday be elite?

After hosting Arkansas, the Aggies go on the road to play South Carolina and Tennessee, two teams that have played well despite carrying less than stellar records.

Jimbo Fisher, Kellen Mond and the Aggies will have to be spectacular if they want to finish the season 9-1. But if there’s any season that values the spectacular, it’s certainly this one.

I'm a third-year student at the University of Florida passionate about storytelling and sportswriting. My goal is to work in communications for a professional sports team after I graduate.
Previous Mississippi State looks to refocus on offense during bye week
Next Gator Baseball Begins Fall Practice