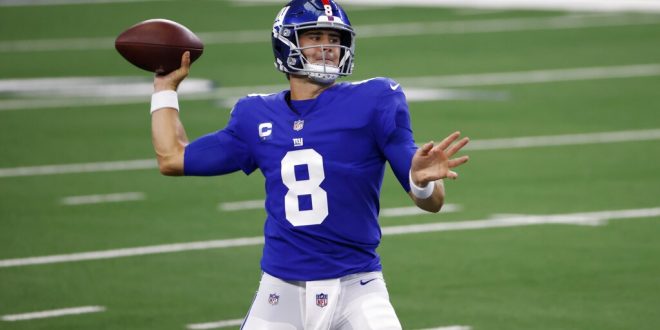 New York Giants quarterback Daniel Jones (8) throws a pass in the first half of an NFL football game against the Dallas Cowboys in Arlington, Texas, Sunday, Oct. 11, 2020. (AP Photo/Ron Jenkins)

On Thursday Night Football, the New York Giants and the Philadelphia Eagles fight for second place in the NFC East. New York sits third in the division at 1-5 after getting their first win of the season last week. Philadelphia is barely above them with a record of 1-4-1.

New York took an early lead last week but struggled to hold it until the very end. The game came down to a Washington failed two-point conversion with a little over 30 seconds left to play.

The offense still looked stagnant as they could not run the football and the passing game was still average at best. Daniel Jones only threw the ball 19 times and ran it seven times. It does not help Jones has been sacked the fourth-most in the NFL behind a Giants offensive line that has not blocked well all season.

The run game from players other than Jones was nowhere to be found against Washington. Jones led the team with 74 rushing yards and Devonta Freeman rushed for 61 yards. Most of Freeman’s rushing yards came in the second half of the game.

The defense has looked much improved from last season and continues to get better each week. The Giant’s run defense is in the top 10 allowing just 106.5 yards per game. The main concern is in the secondary despite adding James Bradberry and Logan Ryan this offseason. Bradberry has been a highlight leading the league with 10 passes defense and two interceptions.

The rest of the Giants secondary is getting torched. Giants coach Joe Judge knows he will need his secondary and the rest of his defense to slow down Carson Wentz and company

The Eagles, hit with the injury bug, have not looked great this season just like the Giants. Philadelphia lost key pieces on their offensive line and it does not get better for Thursday as tackle Jack Driscoll is already ruled out. The Eagles will also be out wide receiver Alshon Jeffery and defensive tackle Malik Jackson. The biggest piece missing is Miles Sanders, their starting running back that has produced all season.

While the Eagles lost last week against the Ravens, the bright spot was their fight at the end of the game to make it a close. It was the help of Sanders rushing for 118 yards and emerging wide receiver Travis Fulgham catching six passes for 75 yards and a touchdown. Philadelphia has leaned heavily on the rushing attack but Thursday might be a game Wentz needs to win. However, he will be missing Jeffrey and his trusted tight end Zach Ertz making this week tough.

On defense, it is similar to the Giants in that they stop the run well but struggle in the secondary. Last week against Baltimore, the Eagles defense held non-Lamar runners to under 30 yards each and 74 combined. However, Lamar Jackson rushed for 108 yards on 9 carries which is a concern because Giant quarterback Jones is known to run himself. The issue is in the back end of the Eagles’ defense. Philadelphia’s pass defense is allowing about 230 yards per game and tied second-lowest with just two interceptions on the season.

Key to the Game

Giants and Eagles will be decided in the trenches. I know that could be said about every game but it remains true for this matchup. Both teams have issues on their offensive line and both teams have strong front fours that can get into the backfield. Whichever defense can get more pressure or whichever offensive line can block for their quarterback better will win on Thursday night.