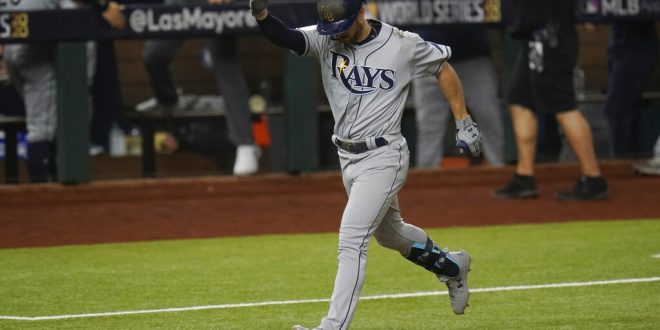 The Tampa Bay Rays defeated the Los Angeles Dodgers in Game 2 of the World Series on Wednesday, 6-4.

Got the first one out of the way pic.twitter.com/1AoatiwUIh

For Tampa Bay, Brandon Lowe and Joey Wendle each had three runners batted in. Lowe hit two home runs, one in the first inning and another in the fifth.

Dodgers’ MVP Mookie Betts was held to zero hits in three at-bats. Last game, Betts hit two balls and scored twice. The only players to score for Los Angeles were Chris Taylor, Corey Seager and Will Smith. Each hit a home run, but Taylor hit one that also ran in Enrique Hernandez.

Pitching the majority for the game for the Rays was Blake Snell. The 27-year-old pitcher threw nine strikeouts, which ties his postseason career-high. Closing the game for Tampa Bay was Aaron Loup and Diego Castillo, who together threw three strikeouts to end the game in the bottom of the ninth. Tampa Bay pitchers combined for 15 strikeouts and only five hits.

Pitching for the Dodgers was a who’s who of pitchers. In total, Los Angeles played seven different pitchers and only threw seven strikeouts.

Los Angeles mounted a comeback attempt after being down 5-0 in the middle of the fifth inning. However, Tampa Bay’s pitching and struggles batting for the Dodgers is what would hold them back from finishing the job.

Kevin Cash, Tampa Bay’s manager, spoke after the game about the confidence he has in his lineup this series.

Tampa Bay’s Lowe struggled in the first game of the series, going 0-4 at the plate. Things were different in Game 2, where Lowe broke through and hit two home runs. He told the media about the struggle, and how his team helped him get through the slump.

The probable starting pitchers for Friday are Walker Buehler for Los Angeles and Charlie Morton for Tampa Bay, according to FOX.