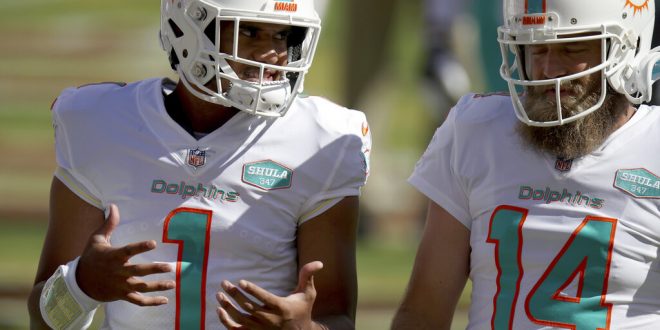 Miami Dolphins quarterback Tua Tagovailoa (1) and quarterback Ryan Fitzpatrick (14) talk on the field before an NFL football game against the San Francisco 49ers, Sunday, Oct. 11, 2020, in Santa Clara, Calif. Miami Dolphins coach Brian Flores says he regrets that his players found out about the team's switch to quarterback Tua Tagovailoa through social media rather than from him. And Flores says the decision to bench popular veteran Ryan Fitzpatrick was difficult.(AP Photo/Scot Tucker)

Fitzpatrick, in his second season with the Dolphins, will relinquish his starting duties to rookie quarterback Tua Tagovailoa, coach Brian Flores announced Wednesday.

The move is a bit of a surprise, considering Fitzpatrick’s good performance this season. The NFL veteran was understandably upset, describing the move as “heartbreaking” to him.

Tagovailoa will take the reins of the offense in Week 8 against the Los Angeles Rams. Before then, Tagovailoa will have some extra time to prepare for his first career NFL start with a bye this week.

News of his benching did not come easy for Fitzpatrick, who currently has the seventh best QBR in the league. In the past two weeks, Fitzpatrick led Miami to two blowout victories. He looked sharp, throwing the ball nicely and commanding the offense well. Now, he finds himself returning to the bench, this time more surprising than others in his career.

Now with his eighth different team, Fitzpatrick posted a career high in completion percentage in his six games this season. Additionally, he has led Miami to second place in the AFC East, sitting one game behind Buffalo.

Despite his recent success, the Dolphins are moving to Tagovailoa, a fresh face in the offense. The Dolphins hope the Alabama prodigy is their next franchise quarterback.

Although devastated, Fitzpatrick voiced his support for Tagovailoa, wishing him well and seeming ready to mentor him in the backup role.

What’s Next for the Vet?

As Fitzpatrick nears the end of his long career as a reliable journeyman, it’s unknown whether he will seek a spot elsewhere, remain with Miami or leave the game entirely. For now, Fitzpatrick intends to remain the backup in Miami, helping Tagovailoa progress as the starter. However, the option of him reprising the starting role still exists.

If the 37-year-old decides to throw in the towel, he will have finished his 18-year career with over 34,000 passing yards and 220 passing touchdowns.