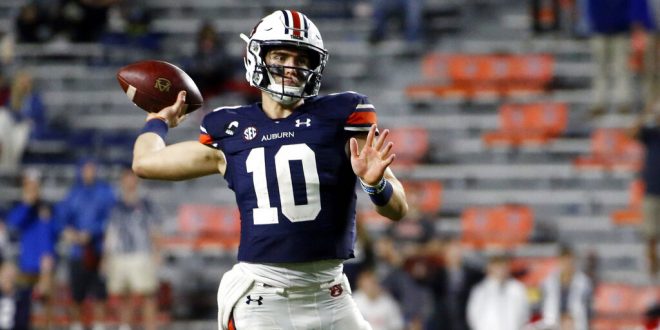 Auburn quarterback Bo Nix throws a pass against Arkansas during the second half of an NCAA college football game Saturday, Oct. 10, 2020, in Auburn, Ala. (AP Photo/Butch Dill)

The Auburn Tigers (2-2) travel to Oxford, Mississippi to take on the Ole Miss Rebels (1-3) in the fifth week of SEC football. The game will kick off at noon in Vaught-Hemingway Stadium Saturday.

The annual SEC West matchup will be the 44th meeting between the historic programs. Auburn currently leads the all-time series 33-10.

Last season, the Tigers defeated the Rebels 20-14 at home in a low scoring affair.

Sophomore quarterback Bo Nix completed almost 70% of his passes throwing for a career-high 340 yards while rushing for a touchdown in the win. The impressive performance helped Nix become the SEC Freshman of the Year in 2019.

When the Tigers and Rebels met last season, @BoNix10 put on a show with a career-high 3️⃣4️⃣0️⃣ passing yards ⚡️ pic.twitter.com/jMh4g5neyV

This year’s matchup will feature two teams who need a win if they plan on turning their season around.

Auburn looks for its third win this season against an Ole Miss team still struggling to find its feet under first-year head coach Lane Kiffin.

Auburn has had its disappointments to begin the 2020 season. The 2-2 start is the program’s worst start since 2015, when the team finished 7-6, during head coach Gus Malzahn’s tenure.

Even with last week’s loss to South Carolina, Malzahn said the team made many improvements, per the Montgomery Advertiser.

“The Bottom line is we made the critical mistakes that didn’t let us win the game,” Malzahn said. “That’s what we have to correct, really just getting back to playing good, hard-nosed, blue-collar, physical Auburn Football.”

Quarterback Bo Nix’s slow start to the season has been a large contributor to the team’s woes.

The sophomore starter has yet to have 300 passing yards in a game this season and has thrown almost as many interceptions(4) as touchdowns(5).

Ole Miss ranks seventh in the nation in total offense putting up over 540 total yards per game. The Rebels average 36.5 points per game this season with scoring outputs of more than 40 points twice against Alabama and Kentucky.

In three of the teams four games this season, quarterback Matt Corral has passed for over 300 yards throwing 11 Touchdowns.

Despite the ability of the offense to put points on the board, the defense has been just as bad as the offense good. The Rebels are ranked 76th in the FBS on defense giving up just under 580 yards per game.