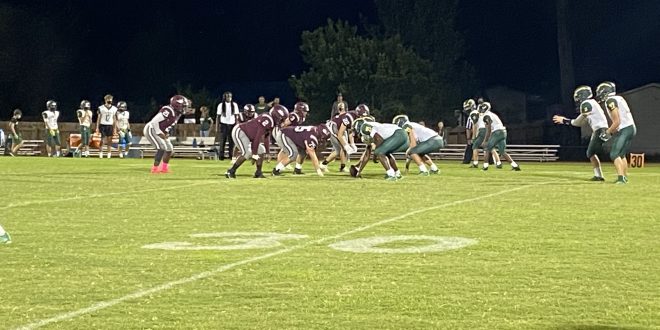 After a nail-biting affair on the road against All Saints’ Academy to secure the top seed in the postseason, the Oak Hall Eagles (6-0) returned home for their final regular-season contest of the year. Awaiting them was the Shorecrest Prep Chargers (2-3), headlined by quarterbacks sophomore Drew Bunn and senior Max Stover. Despite a sloppy first half, the Eagles managed to stay afloat and put an exclamation mark on this regular season, winning 42-8.

It’s game time at @athletics_hall. @OakHallFootball looks to cap off an undefeated regular season with a win against the Shorecrest Prep Chargers. Should be a good game. @ESPNGainesville pic.twitter.com/JlUUXcU1o9

On the opening drive of the game, senior quarterback Andrew Pickens broke free for a long run that ended with him fumbling the ball inside the ten-yard line to give the Chargers possession. This play would prove to be a foreshadow of the ball-handling errors that would plague the team in this game.

“We were flat,” Oak Hall Head Coach RJ Fuhr said. “It was kind of a trap game. We had a game last week that was for the number one seed at All Saints. I worried about that and I even told the team, ‘This team is not bad.'”

“We came out slow. We can’t have games like these in the playoffs.”- Sophomore Jalen Scott

Despite the mishaps, including more fumbles by Pickens and junior Carter Coleman, the team still found ways to score; a Pickens touchdown pass to sophomore Dylan Provencher and a rushing touchdown for the senior quarterback gave the Eagles a comfortable lead over the Chargers. Later in the second quarter, Shorecrest made their fair share of errors as well, giving up a fumble inside their own 20-yard line. The Eagles were quick to capitalize on the turnover, with Pickens scoring another rushing touchdown to make the game 28-0.

“We just got all of the guys together and said, ‘We can’t lay an egg here tonight,'” Pickens said. “We gotta finish off the season strong, and after that, I feel like we tightened up really well and played a really, really good second half.”

After a tumultuous first half, @OakHallFootball was leading 28-0 late in the second. This throw from Shorecrest quarterback Drew Bunn put the Chargers on the board, and kept his team in this game. Eagles lead 28-8 at half. @athletics_hall @ESPNGainesville pic.twitter.com/rDHAWYeNJw

Late in the second quarter, the Chargers scored on a deep ball from Bunn and a two-point conversion to make the game 28-8. After a back-and-forth third quarter that lacked any scoring plays, Shorecrest got to the Eagles’ goal line with a chance to get right back into the game with a touchdown early in the final quarter. However, sophomore Jalen Scott rose to the moment and got an interception to halt the drive and get the ball back to Oak Hall. 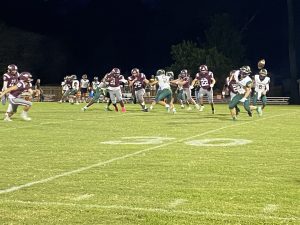 “I kinda just started feeling it,” Scott said. “Our offense did their job, we started picking up blocks, and I got the interception. It’s just about doing our jobs.”

Two more touchdowns came in the second half , courtesy of a Coleman rushing touchdown and a touchdown from freshman Carter Dykes, that would end this game and give Oak Hall a perfect 7-0 record in the regular season.

Despite an, at times, sloppy performance from @OakHallFootball , this touchdown from Carter Coleman should put this game away for the Eagles. @athletics_hall leads 34-8 with 5 minutes to go in the fourth. @ESPNGainesville pic.twitter.com/LyCN3wcG4J

As the Eagles finish their season, a hearty amount of expectations sit on their shoulders. They have had a mere handful of games this season that were even close, and the smallest margin of victory against any of the teams they’ve played was six. However, it’s back to business for this team.

This jump-pass for the two-point conversion off of Carter Dykes’ touchdown would be the final scoring play of this game. @OakHallFootball enters the postseason undefeated with a 42-8 win over Shorecrest. @athletics_hall @ESPNGainesville pic.twitter.com/tqX2e16oLS

With the win tonight, Oak Hall guarantees themselves a home playoff game in front of their fans. Despite the success throughout the season, a 7-0 record is not the goal of this team; it never has been.

Carson Cashion is a first-year student at the University of Florida, and has a major in journalism- sports and media. Originally from the Orlando area, Cashion covers the UF Gymnastics Team, having formerly covered Oak Hall Sports.
Previous Hawthorne Begins New Win Streak, Takes Down Union County
Next Auburn Looks for Win Against Ole Miss