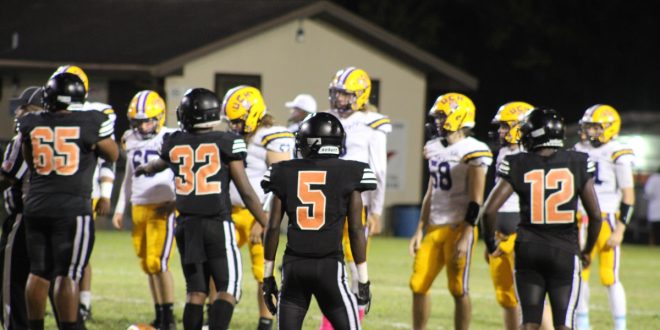 Thanks to a big halftime lead, the Hawthorne Hornets beat Union County in Friday’s non-conference home game, giving the Hornets their fifth win of the season.

The Hornets (5-1) continue their new win streak after last week’s 32-0 win against the Palatka Panthers (0-7).

Hawthorne started the game with a Dre Lawrence 1-yard touchdown, giving them the lead with 5:37 left in the 1st quarter. Lawrence would strike again, this time from 14 yards, again in the 1st. After the two-point conversion, the Hornets shut out the quarter, leading 14-0.

Union County answered in the 2nd with a 2-yard Rayvon Durant touchdown, cutting the Hawthorne lead to 14-7.

Hawthorne added to their lead with Johnquavis Jones taking it 41 yards to the end zone. Camren Cohens caught the 2-point conversion to put Hawthorne on top 22-7 at halftime.

A high snap on a Tigers punt was lost in the endzone for a Hornets safety, extending the Hawthorne lead to 24-7 with 8:03 left in the third quarter. A 22-yard pass from Chaz’ Mackey to Johnquavis Jones put the Hornets in good position to open the scoring in the 4th.

Coach Cornelius Ingram’s team would do just that, finding the end zone on their second play of the quarter with an 8-yard touchdown pass from Chaz’ Mackey to Johnquavis Jones. Hawthorne led 30-7 with 11:09 remaining before Union County mounted their furious comeback.

Union County quarterback AJ Cortese responded with a 67-yard touchdown, breaking through Hawthorne’s defense and cutting the lead to 30-14 with 5:48 left in the game.

The Tigers continued to score with a 30-yard pass from Cortese to Cortez Slocum, making it a two-possession game with just 5 seconds left.

Unfortunately for the road team, the clock struck midnight on Union County’s Cinderella. They would not get the ball back again, falling to Hawthorne 30-20.

Hawthorne will look to continue their win streak next Friday, Oct. 30 against the Zephyrhills Bulldogs (4-2).

Union County will be looking for a comeback on Friday, Oct. 30 against the Chiefland Indians (1-4).