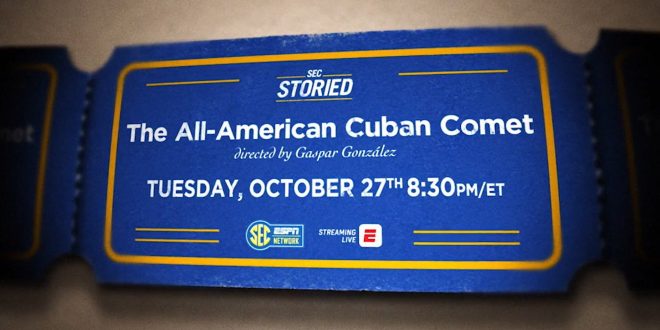 “The All-American Cuban Comet,” a new documentary about former Gator Carlos Alvarez debuts on SEC Network Tuesday at 8:30 p.m. Alvarez made his name known in the 1969 season when he and the three other “super sophs” led the Gators to a 9-1-1 season and a win in the Gator Bowl.

An unforgettable era of @GatorsFB: The Super Sophs.

The super sophs included Alvarez, quarterback John Reaves, fullback Mike Rich, and running back Tommy Durance. The Gators’ 9-1-1 record in the 1969 season was its all-time best record at the time. Over the course of his three seasons, the “Cuban Comet” had 172 receptions for 2,563 yards and 19 touchdowns.

Alvarez immigrated from Cuba to Miami with his family in the 1960s when Fidel Castro was in power. While talking with Steve Russell on SportScene, Alvarez said picking up football meant a lot more to him than just learning a new sport.

However, he made his presence felt off the field, as well. At a time in which protests persisted over the Vietnam War and race issues, Alvarez participated in protests on campus. He also supported integration within the Gators football team and was heavily involved in one of the country’s first student-athlete unions.

As a player, Alvarez once said, “I think that’s the trouble with a lot of people today. They don’t get involved.”

That message seems more applicable than ever in a time where professional and collegiate athletes use their platform for social justice. Alvarez said he supports players today using any platform they have to voice their opinions.

Filmmakers Castor Fernandez and Gaspar González directed and produced the film. Alvarez said González, a University of Florida graduate himself, approached him about the documentary about two years ago. González is also a first-generation Cuban American, according to González, so the story resonated with him.

Alvarez said he has not seen the documentary yet because he trusts the directors’ vision for it.

The “Cuban Comet” became the first foreign-born Hispanic American to become a member of the College Football Hall of Fame, gaining acclaim on and off the field along the way.

I'm a third-year student at the University of Florida passionate about storytelling and sportswriting. My goal is to work in communications for a professional sports team after I graduate.
Previous Dodgers Gear Up For Game 6
Next Gators OC Brian Johnson Ready For Return