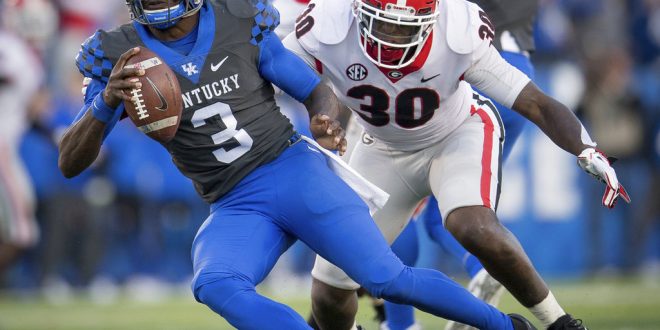 FILE - In this Saturday, Nov. 3, 2018, file photo, Georgia linebacker Tae Crowder (30) pressures Kentucky quarterback Terry Wilson (3) during the second half an NCAA college football game against in Lexington, Ky. Kentucky’s biggest challenge may come Saturday when the Wildcats close their SEC schedule at Tennessee, where they have lost 16 straight and haven’t won since 1984. (AP Photo/Bryan Woolston, File)

We got an SEC East matchup this weekend, as the Kentucky Wildcats host the fifth-ranked Georgia Bulldogs. Both teams come into this game following a loss.

Georgia Football, one of the top rank teams in the country, enters this match up against Kentucky with one lost under its belt. The Bulldogs are coming off a bye week and should be well-rested heading to Kroger Field. Prior to this matchup, the Bulldogs took a tough 41-24 loss to a No.2 Alabama.

Stetson Bennett will make his fourth start this season as Georgia’s QB. Bennett did not have a good game against Alabama throwing three interceptions but had a career-high of 40 pass attempts and 269 passing yards. Georgia leads the all-time series between these two teams 59-12-2.

Kentucky, looking for a change this weekend, has its offense switched around. The  Wildcats offense was shaken up last weekend in their matchup against Missouri as their star quarterback Terry Wilson left the game with a wrist injury when they were taken down 20-10. There is no answer on when Wilson will make a return to the Wildcats after missing practice the whole week.

Going into this weekend, the starting quarterback Joey Gatewood.  Gatewood is a transfer from Auburn, where he redshirted half the season his freshman year before transferring to Kentucky. He was granted immediate eligibility by the SEC to play for Kentucky.

Going into this game maybe one of the biggest games of his career starting against Georgia. Wilson is a big task ahead of him being that Georgia defensive line is one of the tops in the country and also standing at number two in the SEC for defensive sacks.

Kick off for this matchup will take place in Kentucky at Kroger Field, Saturday at noon.