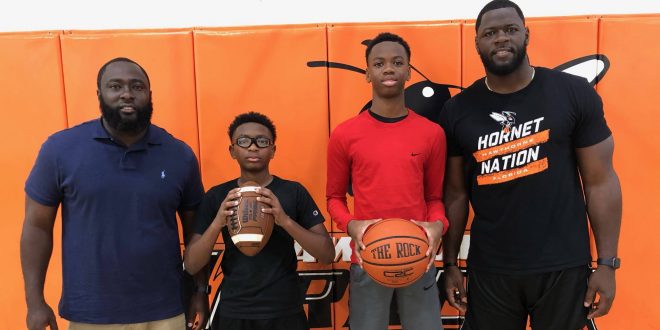 Two young student-athletes scrap it out on Bill Woods Court. On the hardwood, the two are rivals, but off the court, they are not only best friends, but also cousins. While the kids are engaged in their intense one-on-one basketball game, their two fathers watch over from the bleachers as they reminisce on their own battles of old.

Growing up in Hawthorne

Greg Bowie, 39, has been coaching his alma mater’s boys basketball team for over a decade. Cornelius Ingram, 35, returned to Hawthorne to coach the football team in 2014, after a short stint playing in the NFL. He later also became the girls basketball coach.

The two brothers moved to the small town at a very young age. As the new kids, they often only had each other to play with. Ingram, the younger brother, regularly lost to Bowie in their one-on-one basketball games.

“He was so much stronger than me, both physically and mentally,” Ingram said of his brother.

Ingram said his brother’s physicality often made him want to quit.

“This one time, I got so upset that I just walked in the house,” he said. “My parents asked if we were done already, and I said ‘Greg’s fouling too much. I don’t want to play anymore.’ They told me to go back outside and finish what I started.”

A couple of decades later, history is repeating itself, only with the roles reversed.

“It’s kind of like deja vu, the way we competed every day in the yard and on the goal,” Bowie said. “They go at each other hard, and it gets physical, but once that game is over, they still play NBA 2K or Madden together.”

The boys may not speak to one another for a few hours after a heated game, but they always make up.

“It gives me chills seeing them play together because they’re like a spitting image of us as kids,” Ingram said. “They’re going through the same things we went through.”

Growing and learning together

Despite their scuffles, whenever C.J. and Darian team up on the court, they are a force to be reckoned with.

Similarly, the two fathers were also unstoppable when paired up. The two designed their own plays and signals together, forming a bond defenses had no answers for.

“Yes, there were times where I would want to go lay down and say ‘Man, I hate my brother,’” Ingram said. “But then the next day, he throws me a winning touchdown, and I’m like ‘Man, I love my brother.’”

Bowie said that he recognizes now that the tough love they received from their parents shaped them into the men they are.

“Looking back at the battles we had, it really prepared us in parenting and coaching,” Bowie said. “Perseverance is key. It’s going to get tough, and you’re going to get pushed around. You just have to find a way to hang around.”

One summer, Ingram hit a growth spurt and was finally able to overtake Bowie in basketball. All this did, however, was motivate Bowie to work harder.

“Once he hit that spurt, the things I did that used to automatically work just didn’t anymore,” Bowie said. “I wasn’t ever going to let my little brother beat me, so I had to find other ways to win those battles. We constantly made each other better.”

As they got older, Ingram blossomed into a basketball and football star, while Bowie settled into a coaching role. As a four-star recruit, Ingram played both sports at the University of Florida, where he won two football national championships. He was drafted in the fifth round of the 2009 NFL Draft by the Philadelphia Eagles, though his career was short-lived.

While Ingram was catching passes from Tim Tebow and Donovan McNabb, his brother was by his side supporting him the entire way.

“When I was going through my recruiting process and going to camps, he would always go with me and plan out the drills we would do back home in the gym,” Ingram said. “He is always the No. 1 person I can count on. I wouldn’t be where I am today without him.”

Today, both brothers are state championship-winning coaches, as both of Hawthorne’s girls and boys basketball teams won titles this March. There is no real competitiveness between the two squads, however, as the two coaches have combined them into one shared program.

Congrats big bro @CoachBowie_HHS on being named the Florida Dairy Farmers Class 1A Coach of the Year. #GoHornets pic.twitter.com/gL0nZCM2qW

“His successes are my successes, and his failures are my failures,” Bowie said. “We both just want what’s best for Hawthorne and for these kids.”

With the success that both brothers have seen at such a small school with limited resources, many other job offers at bigger schools have come their way. However, it would be difficult to ever leave their hometown, both brothers said.

“It’s so much sweeter to do it in the same hallways that we walked through,” Bowie said. “To take what’s normally considered an outmanned school and still compete against these programs that have everything is priceless.”

Ingram has been a part of some great teams and big moments, but he believes there is no place like home.

“I always tell people, even after winning two national championships at Florida, winning one here was so much bigger for me because I’m from Hawthorne,” he said. “People always count us out here. It’s a dream come true to see these kids come together for one goal. Money can’t buy that true happiness.”

Though the two student-athletes’ love for sports is deeply rooted in their DNA, both fathers emphasize that school comes first.

“Anything lower than a B, and they’re not allowed to play,” Ingram said. “They know how important education is. That’s how it is with all our kids here. I hope they understand where we’re coming from as coaches. It’s all about giving back and passing down valuable life lessons.”