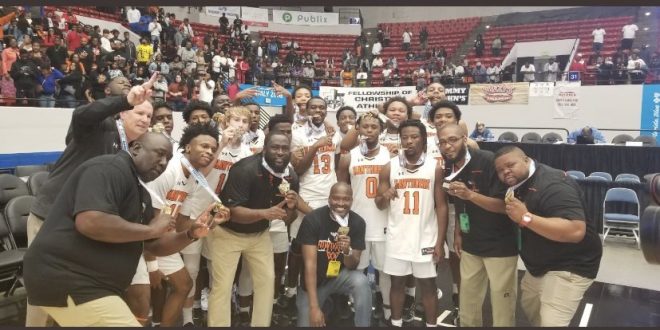 The Hawthorne Hornets and Hillard Red Flashes faced off in the Class 1A State Championship game on Friday night in Lakeland, Florida, at the RP Funding Center after Hawthorne defeated the Paxton Bobcats in the State Semifinals Wednesday.

The Hornets beat the Red Flashes 42-38 in a close game to win their second boy’s Class 1A State Title in team history, the first since the 1987 team led by coach Bill Woods.

The Hornets had a strong effort defensively the whole game forcing multiple steals and turnovers to the Red Flashes. They were able to hold Hillard 6’6″ star senior power forward Jacob Crews to just 2 of 7 shooting in the first half.

During the second-quarter Key’shuan Williams and Dre Lawrence forced a Red Flashes turnover, which led to a Torey Buie basket just before the end of the first half.

The Hornets went on a 6-0 run going into halftime. Buie made a layup at the buzzer off an assist from Key’shaun Williams to bring the Hornets within one against the Red Flashes 18-17.

Jacob Crews tied the game at 38-38 with 1:27 left on the clock in the fourth quarter. The next possession a technical foul was called on Jalen Jones with 49 seconds left in the game. Torey Buie took the free throw attempts making only one of the two shots, increasing the Hawthorne lead to 39-38.

There were 30 seconds left on the clock when Crews lost the ball, turning it over to the Hornets. Dre Lawrence was intentionally fouled as he crossed half court. He hit one of two free throws to put the Hornets up 40-38.

The Hornets forced another turnover as Tywuan Lee was called for traveling. Dre Lawrence drew a foul once he inbound the ball. He hit both free throws to secure the win for the Hornets with the final score of 42-38.

Then, the Hawthorne Hornets team celebrated with their coaches after securing the win.  Hawthorne’s Torey Buie ended the game as the leading scorer with 20 points and they were able to hold Hilliard’s Jacob Crews to only 13 points.

The Hornets were all smiles as they were presented with their state championship medals.

Head coach Greg Bowie held up the state championship trophy for the Hornet fans after winning the title.

The Hawthorne Hornets boy’s and girl’s basketball teams both won Class 1A state titles this year. The boys ended their season at 25-3, and the girls finished their season at 29-2. The last time both the boys and girls teams won a state title in the same year was when the Wildwood Wildcats did it back in 2018. 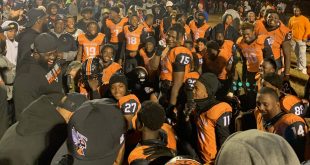