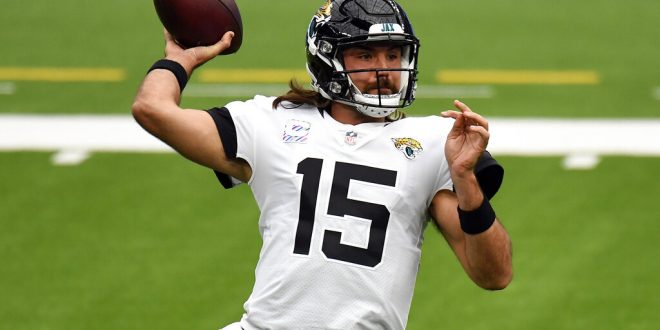 With a (1-6) record and his starting quarterback out with injury, one thing is clear for Jacksonville Jaguars head coach Doug Marrone: it’s time to do something ‘crazy’.

In a press conference on Monday, Marrone noted the need for Jacksonville to try something new and get out of their slump. In their season opener against the Indianapolis Colts, the Jags showcased the potential of their young team. Since then, they have let the last six games slip out of their reach.

Offensively, Jacksonville will get a new face under center on Sunday. With Gardner Minshew II out with a right thumb injury, the Jags will get their first look at rookie quarterback Jake Luton.

Rookie quarterback @JakeLuton6 will get his opportunity this week.

Luton passed for 2,714 yards and 28 touchdowns with only 3 interceptions as a senior at @BeaverFootball last season.

After taking over as starter in 2019, Minshew has provided the Jacksonville offense with a competitive spirit. Minshew Magic took full force in Duval but the magic has failed to turn things around this season.

The second-year starter has been QB1 for all seven games in 2020. For the first time this season, the quarterback will be sidelined to recover from a right thumb injury.

Although it is unclear when Minshew first received the injury, the quarterback could be out for a few weeks to fully recover. According to ESPN, Minshew’s injury includes multiple fractures and a sprained ligament in his throwing hand.

Marrone stated he doesn’t plan to place the quarterback on the injured reserve list. Minshew first reported pain in his right thumb after Jacksonville’s loss to the Los Angeles Chargers on Oct. 25.

Marrone commented on Minshew’s competitive nature and desire to keep playing despite the injury.

Minshew has thrown for 1,855 yards, fifteen touchdowns and five interceptions this season.

Why Luton over Glennon?

The Jags have options when it comes to taking over for Minshew on Sunday afternoon. Marrone and the Jaguars know what to expect out of veteran quarterback Mike Glennon.

Glennon is a reliable backup quarterback who has bounced around the league since 2013. During his stints in Chicago, Tampa Bay, Arizona and Oakland the quarterback has thrown for 36 touchdowns and twenty interceptions.

Marrone noted Glennon is definitely an option for Sunday’s game but is more interested in giving Luton the chance to showcase his potential.

Marrone is interested to see what the rookie quarterback will do in his first NFL start.

The Jags are no stranger to seeing a former sixth-round pick become the life of the offense. In 2019, Minshew Magic sparked the Jacksonville offense after taking over for the injured starting quarterback Nick Foles.

Luton, a sixth-round draft pick out of Oregon State, show similar attributes to Minshew. The rookie had an explosive senior year before entering the draft, throwing for 2,714 yards and 28 touchdowns.

Although Luton has yet to take a snap in the NFL, Marrone stated if his performance is up to par it could be worth continuing to start Luton. With Minshew out at least a few weeks, Jacksonville will have to continue considering Glennon or Luton for the starting role.

Luton will get his first NFL career start against the Houston Texans on Sunday at 1 p.m.