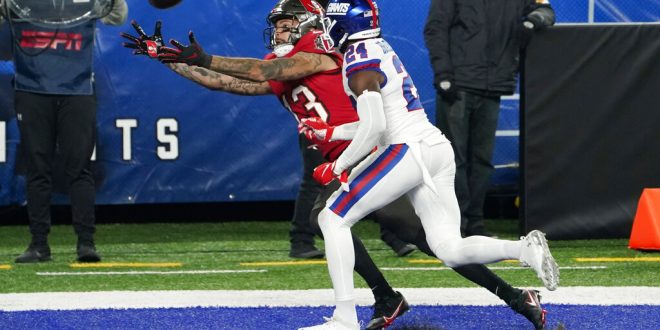 Tampa Bay Buccaneers' Mike Evans, left, catches a ball in the end zone for a touchdown in front of New York Giants' James Bradberry during the second half of an NFL football game, Monday, Nov. 2, 2020, in East Rutherford, N.J. (AP Photo/Corey Sipkin)

The Tampa Bay Buccaneers rallied to a 25-23 victory over the New York Giants. After trailing the Giants 14-6 at halftime, Bucs’ Tom Brady threw two touchdown passes to earn the win.

The 1-7 Giants made the Buccaneers work for this victory, as they kept the lead for most of the game. The Bucs were able to get the lead late in the third quarter, but a field goal from Giants’ Graham Gano brought them back the lead.

New York entered the last frame with a 17-15 score.

But offensive mistakes prohibited the Giants from closing out with a win.

Giants’ Daniel Jones threw two interceptions in the second half of the game — which the Bucs turned into 10 points. The second half also featured Brady’s pass to Mike Evans, which gave them the lead once more with nine minutes left in the game.

The Giants’ defense gave the team the opportunity to come back after holding the Bucs to a field-goal on their next drive.

Jones was then able to connect with Golden Tate for an 18-yard score. After that the Giants went for an unsuccessful  two-point conversion attempt that would’ve tied the game. Rookie defensive back Antoine Winfield Jr. was responsible for breaking up the attempt to Dion Lewis.

During the breakup, a flag was thrown by officials, and a pass interference call was made. But after further review, the call was reversed and the play was ruled as an incomplete pass.

Jones was able to complete key plays throughout the game. And despite the two interceptions and a failed two-point conversion, Jones is not the only one to blame for this loss.

Giants’ offensive coordinator Jason Garrett was not calling a lot of smart plays. But even when he did, missed open-wide passes wasted those good calls. Wide receiver Sterling Shepard also seemed to misread a call that would have been a touchdown. Many wide-open passes were missed by Giants receivers.

Giants’ head coach Joe Judge acknowledged that their offensive struggles are causing too many turnovers and that is something that needs to be fixed.

The Giants’ unsuccessful two-point conversion might be attributed to Jones’ late release of the ball. But Judge says that he is still confident that Jones is the quarterback for them.

It will be a battle of the veterans next Sunday as Brady’s Bucs host Drew Brees and the New Orleans Saints. Kickoff is set for 8:20 pm.

As for the Giants, they will travel to face the Washington Football Team. Kickoff for this Sunday match is set for 1:00 pm.

Camila is a senior at the University of Florida, who served as a beat writer for the women's basketball team from 2019 until the 2021 season. She was also a beat writer for the Gators football team during the 2020 season. Camila is also WUFT's news director as well as a sports reporter/anchor.
@CamilaMaffuz
Previous Gators Soccer Struggles with a 1-4-1 Record
Next Minshew Injured, Jaguars Starting Rookie Jake Luton Against Texans