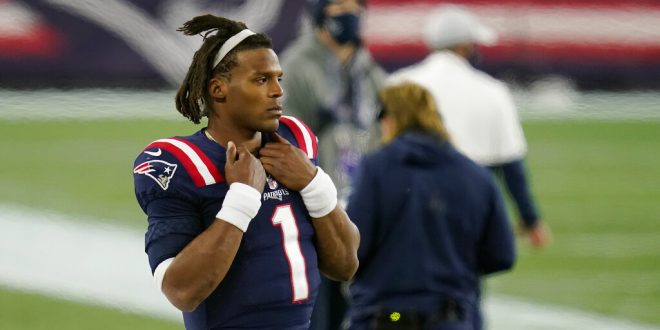 New England Patriots quarterback Cam Newton watches from the sideline after being replaced by Jarrett Stidham in the second half of an NFL football game against the San Francisco 49ers, Sunday, Oct. 25, 2020, in Foxborough, Mass. (AP Photo/Charles Krupa)

Patriots With Worst Franchise Start Since 2000, But Sticking With Cam At QB…For Now

Divorces are messy. As much as you want to think that the kids aren’t going to be affected by the split — in reality, it’s inevitable.

The Patriots loss on Sunday against the Bills was the team’s fourth consecutive loss and dropped their record to 2-5 on the season, their worst start since the 2000 season.

Then, Tom Brady had yet to even throw a pass in the NFL.

With anybody else as his starting QB: 51-66 pic.twitter.com/UvXClmtbZk

Belichick said his team’s struggles have been a result of a smaller roster payroll.

The Patriots will only pay out 87.4% of their salary cap this season. This is compared to 97% in each of the last three years and at least 93% in every year since 2013, per Spotrac.

This figure is largely in part due to the eight Patriot players who chose to bypass the 2020 season due to the COVID-19 pandemic.

The reworked roster has forced Coach Belichick’s hand in giving way to the youth movement in New England and their youngest roster since 2016, according to Spotrac.

It’s a different model than the one the Patriots are used to operating on with a 42-year-old signal-caller under center accompanied by his choice of established veterans.

And the Patriots could be looking to get even younger at the trade deadline with some veteran players potentially on the way out of New England.

The 2019 AP Defensive Player of the Year — the Patriots may be looking to trade him away.

With the trade deadline approaching at 4 p.m. today, the Patriots have expressed to teams they’re looking for a first-rounder and a player in return for CB Stephen Gilmore.

Gilmore has been open about his frustration with his situation in New England which initially started over the offseason when Gilmore missed a majority of offseason meetings after contract disputes.

It was last Tuesday, Gilmore’s home in Foxboro was listed for sale on Zillow which noted that there would be open houses over this past weekend. Offers would have to be made by Tuesday at 5 p.m. — one hour after the trade deadline.

The success of the Patriots has largely been dependent on the performance of 31-year-old quarterback Cam Newton.

After starting nicely out of the gate with an average passer rating of 84.2 in his first two games as Patriots QB, Newton has seen that number crawl down to 57.5 in his last 3.

His passer rating of 73.2 ranks 31st among the NFL’s 33 qualifying quarterbacks. He hasn’t thrown a touchdown pass since Sept. 27.

The Patriots’ disappointment came to a climax on Sunday when Newton fumbled the ball at the Buffalo 14-yard line during the Patriots’ potentially game-winning drive down the field, down 3 points with 31 seconds remaining.

Cam said this about his performance.

Despite the self-critical words from Newton, Coach Belichick kept his message simple after the game on Sunday.

First Time For Everything

While the saying holds true of “all good things must come to an end,” it may not be this black and white with the Patriots. Despite their struggles this season, anytime Belichick has been doubted, he’s responded time and time again.

Albeit this time, it’s without his life-long partner in Tom Brady. Only time will tell if the Patriots response comes in the form of a second-half surge into the playoffs or a *dramatic pause* — rebuild.