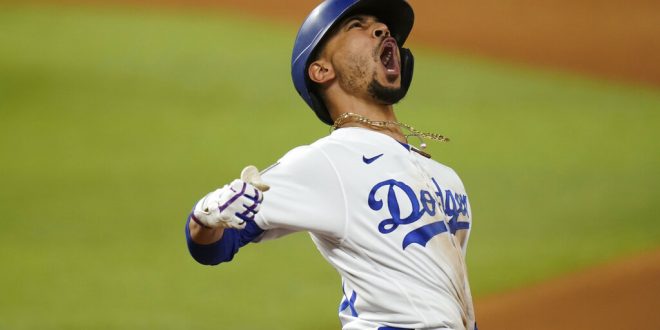 The MLB released the finalists for the Most Valuable Player, Cy Young, Rookie of the Year and Manager of the Year Awards on Monday. The winners will be announced throughout next week.

Dodgers outfielder Mookie Betts, fresh off leading the Dodgers to their first championship since 1988, is one of three finalists for the NL MVP Award. Betts could become the second player in MLB history to win an MVP award in both leagues. He won the AL award in 2018 with Boston before he was traded to Los Angeles.

Congratulations @mookiebetts on being named a finalist for MVP! pic.twitter.com/OqKssXnLVL

Rounding out the rest of the MLB Awards

In the AL, the Cy Young race is down to Cleveland’s Shane Bieber, Minnesota’s Kenta Maeda and Toronto’s Hyun-Jin Ryu. Bieber is the favorite in the AL after a dominating 2020 season. The 25-year-old led the American League in ERA and strikeouts this season while posting an 8-1 record in 12 starts.

For the NL, Trevor Bauer (Reds), Yu Darvish (Cubs) and Jacob DeGrom (Mets) are the finalists for the Cy Young. Bauer was the NL leader in ERA (1.74) and had a 5-4 record. Darvish had an ERA of 2.01, won eight games and struck out 93 batters across 76 innings. DeGrom could become the third pitcher in league history to win the Cy Young three years in a row.

These guys were filthy.

After that, for Rookie of the Year awards, Phillies third baseman Alec Bohm, Padres infielder Jake Cronenworth and Brewers pitcher Devin Williams are the three finalists in the NL. Astros pitcher Cristian Javier, Mariners outfielder Kyle Lewis and White Sox outfielder Luis Robert are in the running in the AL.

Lastly, Rays manager Kevin Cash is a finalist for AL Manager of the Year along with Charlie Montoyo of the Toronto Blue Jays and Rick Renteria, who was fired by the White Sox after Chicago was eliminated in the postseason. Don Mattingly (Marlins), David Ross (Cubs) and Jayce Tingler (Padres) are in the running for the NL award.

Previous Patriots With Worst Franchise Start Since 2000, But Sticking With Cam At QB…For Now
Next Florida Swim and Dive Ready to Make a Big Splash