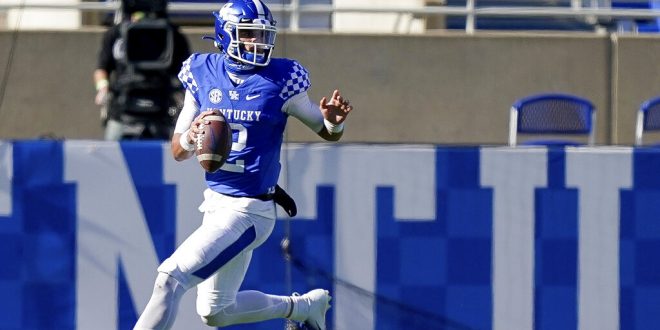 Kentucky quarterback Joey Gatewood (2) scrambles with the ball during the second half of an NCAA college football game against Georgia, Saturday, Oct. 31, 2020, in Lexington, Ky. (AP Photo/Bryan Woolston)

Can a Bye Help Kentucky Offense?

A bye week can be boring, full of waiting. However, for the Kentucky Wildcats, a bye week could be just what they need.

Kentucky has had a lack of talent at wide receiver for a few years now. In the Wildcats 14-3 loss to Georgia, their passing game continued to be less than stellar. In 15 completed passes, Kentucky threw for just 91 yards.

The Cats are either last or close to last in every passing category in the SEC. Kentucky’s pass game features almost no vertical threat and fans are complaining that the play-calling has become too conservative and predictable.

Previous coaches are even speaking out on the passing game issue, including Lamar Thomas, a former Kentucky assistant under Stoops.

Dang i mean you have been thru 3 wr coaches in last couple of years , its time to start getting a down the field passing game!! The Tight-ends and the wide-outs wanna play 2 !! #whynot. #throwit #tiredofwatchingtherungame

While the Cats do rank second in the SEC in rushing, having their wide receivers not getting open is also slowing the rushing game down.

Teams can get away with one on one coverage of Kentucky’s wide receivers because of their struggles getting open. And on third-down plays, the last thing the Cats want is their opponent being able to slow down the run and create a pass rush.

While Kentucky’s offensive line is outstanding, their area of improvement comes in the form of pass protection. The Cats’ second-ranked rushing defense is largely due to the offensive lines’ great run blocking. However, on the pass protection side, things are not as great.

The offensive line gave up four sacks against Georgia. They have now given up the fourth-most sacks in the SEC, even though they rank 13th in pass attempts.

Creating a passing game is difficult when a quarterback has no time to make reads. However, the offensive line also has not gotten much practice in pass protection since Kentucky runs such a run-heavy offense. This bye week is the perfect time to get some practice in.

Stoops knows his team can be great offensively but they need to spend time in practice developing the passing game.

Following Kentucky’s bye weekend, the Wildcats will face Vanderbilt at home. Vanderbilt is 0-4 on the season. Kickoff for November 14th is set for noon and can be watched on the SEC Network.