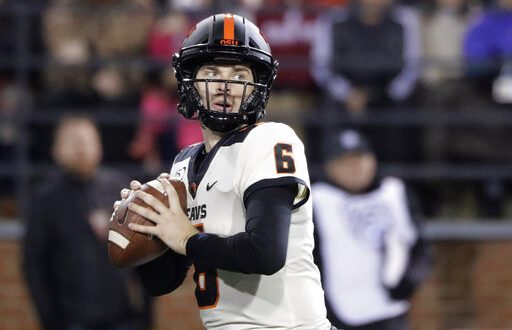 Following a six-game losing streak that was graciously paused in week eight thanks to a bye week, the Jacksonville Jaguars hope to notch their second win of the season when the Houston Texans travel to Jacksonville on Sunday.

But for the first time in the 2020 campaign, someone other than Gardner Minshew will step under center for the Jaguars.

And while the loss of Minshew is certainly deflating, the Jaguars must remain focused on the task at hand — splitting the season series with the Houston Texans.

And to do that, the Jaguars must rely on the team’s other Pac-12 quarterback alumnus — a rookie prepared to fulfill a childhood dream.

What to Expect from Luton

Jacksonville’s 2020 sixth-round round draft pick Jake Luton is set to take his first career snap in his first career start Sunday after it was determined that Gardner Minshew cannot play thanks to fractures and a strained ligament in his right thumb.

Standing at nearly 6-foot-7, the Oregon State product’s physical traits and skills suggest that he is a prototypical, big-armed passer. But while in college, Luton often opted for the easier and more efficient check-down routes. And in 23 games at Oregon State, he completed 62.1% of his passes while throwing for 5,227 yards and 42 touchdowns.

His accuracy especially shone through in his senior season, as he threw 28 touchdowns to just three interceptions.

But just because he opted for the safe throw doesn’t infer that he’s incapable of big-time passes. In fact, the opposite is true.

According to Pro Football Focus, Luton finished eighth among all collegiate quarterbacks on deep throws in 2019. And while attempting to complete a pass 20 or more yards downfield, he converted on 26 of his 51 attempts.

On those attempts, he amassed 836 yards and 13 touchdowns.

Additionally, he was the only collegiate quarterback in the nation to score 11 or more touchdowns on deep pass attempts without throwing an interception.

Expect Luton to show off his big arm when it’s appropriate. But know that he will often take the smart and easy play when it’s available.

And hope that Luton can replicate some of the sixth-round success that Jacksonville captured with Gardner Minshew at the helm in 2019.

Or better yet, recreate a legend who emerged just over twenty years ago in New England. Of course, that was when a second-year quarterback took the reigns from an injured Drew Bledsoe.

While Jaguars’ head coach Doug Marrone certainly hopes that his team can end its six-game losing streak and improve its record to 2-6, he is also intrigued to discover what kind of quarterback he has in Luton.

Marrone has already touted Luton’s natural athletic abilities. Of course, Luton is tall, agile, athletic and he has a strong arm.

The head coach has also spoken glowingly of Luton’s dedication to preparation, work ethic and intellect.

But like the rest of us, Marrone does not know how that will translate to the NFL.

If those traits, skills and abilities can converge with the abilities to effectively read defenses and handle pressure, Luton should be poised for a memorable debut.

How many games Gardner Minshew will miss remains unclear. However, it is clear that Minshew is offering his full support to Luton in his absence.

The rookie quarterback said that Minshew offered assistance and help when he ran into him at the Jaguars’ facility after he found out that he would be starting in the week nine match-up with Houston.

Minshew suffered the injury in Jacksonville’s first meeting with the Texans on Oct. 11, when Houston notched its first win of the season with a 30-14 victory.

Minshew would then play the next two games against the Detroit Lions and Los Angeles Chargers, respectively. But his production and accuracy suffered mightily.

In Minshew’s first four games before the injury occurred, his completion percentage did not dip below 65%.

That changed after he suffered the injury against Houston, as he posted a 63.3% completion percentage — presumably playing while injured. Minshew then registered 56.8% and 51.9% clips in losses to the Lions and Chargers, respectively.

Previous Florida vs Georgia Clash in Jax For First Place in the SEC East
Next South Carolina Gamecocks Host No. 7 Texas A&M