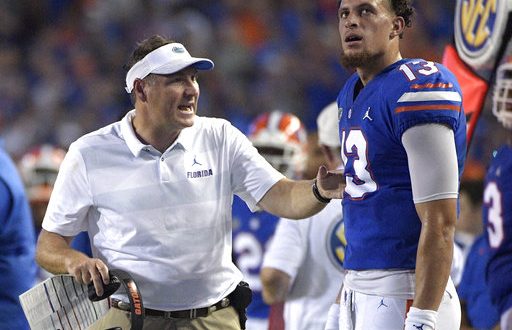 Florida vs. Arkansas Football Preview: The Return of Feleipe Franks

There is a new king of the SEC East. Last Saturday, The Florida Gators finally made it over the hump and defeated Georgia, 44-28, taking first place in the SEC East. This week, the No. 6 Gators (4-1) return to the Swamp to take on the Arkansas Razorbacks (3-3). Arkansas is coming off a win as well. The Razorbacks beat Tennessee 24-13 on Saturday. Both teams were able to take commanding leads with a 24-point quarter in their last matchups.

This game will feature the return of former Gator, Feleipe Franks. Yet, he will not be wearing orange and blue. From 2016-2019, Franks played for Florida for three seasons where he threw for 4593 yards, 38 touchdowns and 17 interceptions. This will be his final game in the Swamp.

Dan Mullen knows this is not a team to overlook. Arkansas has been very competitive in all of their games this season. They have shown “Mental toughness” and their “ability to win,” even though it doesn’t show up on the stat line. Another incentive that Mullen has to win, but probably isn’t concerned with, is this stat from Scott Carter.

Keys for Florida to Win

Stud tight-end Kyle Pitts is questionable with a concussion. Midway through the second quarter against Georgia, Pitts took an awful helmet-to-helmet hit. Kyle has 24 receptions for 414 yards and eight touchdowns on the season. This would be a big loss for the Gators but there is a bright side to this. In his absence, Kemore Gamble and Keon Zipperer showed promise. Gamble had three catches for 51 yards and a touchdown, while Zipperer had a 39-yard catch and run. UF is in good hands in the tight-end department. Mullen explains the situation and how the offense doesn’t change.

Last week truly showed how many weapons Florida has and how many mismatches they create for defenses. Trask completed at least one reception to ten different receivers. The two leading receivers in yards were running backs Malik Davis (100) and Nay’Quan Wright (71). Including Dameon Pierce, the running backs had 39 touches for 300 of the 571 total yards. Although, it was Kadarius Toney who led the team in receptions with seven for 42 yards. Toney will need to step up in Pitts’ absence, which shouldn’t be a problem. He has been playing lights out all season. He is too quick to guard and too slippery for the first defender to tackle. Except him to be heavily involved.

Keys for Arkansas to Win

DC Barry Odom will be the head coach for the Razorbacks with Sam Pittman not available, due to a positive COVID test. Odom was the head coach at Missouri for the last four season. As well as Pittman has done for Arkansas, Odom will be able to step in without a hitch. Pittman reassures that thought as well.

There was a reason Feleipe Franks was recruited to Florida. He is a great pro-style quarterback that has improved his ground game. On the season, Feleipe has completed 67.2 percent of his passes for a total of 1,428 yards, 14 touchdowns and just three interceptions; he has also run the ball 72 times for 174 yards. Expect Franks to play well, behind his two running backs, Trelon Smith and Rakeem Boyd, that both have 70 rushes on the season. Franks, Smith and Boyd have a combined 750 of the 829 rushing yards on the season.

If the Razorbacks want to slow down Florida’s air raid offense, they will need a great game from DB Hudson Clark and DB Jalen Catalon. Clark is tied for first in the conference in interceptions with three and Catalon is third on the team in tackles with two interceptions himself. Arkansas leads the conference in interceptions on defense with 12 on the season, three returned for touchdowns. This defense is built to slow down the Gators’ pass game, even though the offense is not one-dimensional.

Florida is the favorite and the way their defense has been playing the last two games, Arkansas will compete but should fall short in an expected shootout in the Swamp.