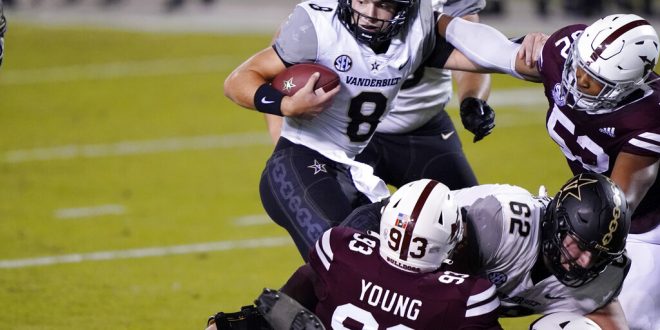 The winless Vanderbilt Commodores (0-5) travel to Lexington to face the Kentucky Wildcats (2-4). The game will kick off at noon this Saturday on the SEC Network.

The game between Vanderbilt and Kentucky is one of three SEC matchups this weekend. The conference canceled four other matchups due to Covid-19 complications this week.

Vanderbilt Head Coach, Derek Mason, said that the team is looking forward to playing this weekend with so many league games canceled.

Kentucky beat Vanderbilt 38-14 in Nashville last season during their annual clash. After trailing 14-3 at the end of the first quarter, Kentucky would hold Vanderbilt scoreless the rest of the way to earn the win.

The Wildcats currently hold the all-time series lead over the Commodores 46-42-4.

The Commodores stand alone at the bottom of the SEC as the conferences only winless team so far this season.

Vanderbilt has struggled to cope with offseason opt-outs and Covid-19 diagnosis’ that sidelined players earlier this year.

The team is coming off one of their best performances of the season last week in a 24-17 loss the Mississippi State. The Commodores 17 points marked the second highest output of the season.

Scoring is one of the issues that has held back the team this season. Their highest offensive output this season came against Ole Miss in a 54-21 loss.

The team ranks as the fourth worst team in NCAA Division 1 Football offensively averaging only 12.8 points a game.

Quarterback Ken Seals and wide receiver Cam Johnson, who lead the team in passing and receiving, will have to match the team’s season high in points to compete with a Kentucky offense that averages almost 21 points per game.

This season, both of the Wildcats dual-threat quarterbacks, Terry Wilson Jr. and Joey Gatewood, will have to step into that role.

With a lackluster offense that averages less than 300 total yards a game, Kentucky will look to their defense, which currently ranks 30th in the nation, to lead the team to victory this Saturday.

Kentucky will look to earn a win against the worst team left on their schedule before traveling to top-ranked Alabama and sixth-ranked Florida their next two weeks.