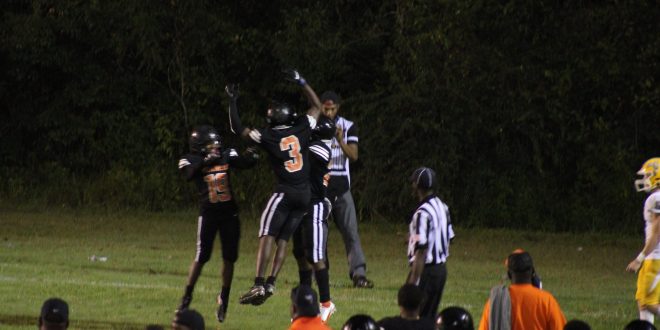 Hawthorne players celebrate in the end zone during their 40-0 win over Chiefland Friday night in Round 1 of the FHSAA Playoffs (Photo Credit: Keishla Espinal/ESPN Gainesville).

Hawthorne Obliterates Chiefland, Advances To Round 2 Of Playoffs

After a hectic early part of the week, Hawthorne left no doubts about what direction they are trending now that the playoffs are underway: up.

The Hornets (7-2) easily took care of Chiefland (1-8) in the opening round of the FHSAA Class 1A playoffs 40-0 Friday night at home.

Towards the start of the week, like many games this year, the status of the game was up in the air. This time, it was not COVID-19, but Tropical Storm Eta that did the damage on the Hornets’ schedule.

Hawthorne was originally set to host their first tournament game Wednesday night when Coach Cornelius Ingram’s team received word that they would practice instead of play. The game was moved in anticipation of inclement weather from Eta’s expected landfall in North Central Florida beginning late Wednesday night and throughout Thursday, per Ingram.

“I’m just proud of them just from the standpoint of what we had to go through to get here, so we’re continuing to get better…hopefully, these kids can reap the benefits of their hard work.”

And work hard they did, especially in their red zone rushing game. Senior Dre Lawrence and sophomore Brian Jones traded blows to the Indians’ defense, combining for 80 yards and four touchdowns for the night. Junior quarterback Chaz’ Mackey went 9-for-11, adding 136 yards.

In the 4th, junior Jamal Nealy also found the end zone with a touchdown of his own. Freshmen quarterback Antonio Hubbert and receiver Lorenza Simmons joined him in the waning minutes, a freshman-to-freshman connection from 10-yards out to close the scoring.

Although Chiefland would surprisingly outrush Hawthorne (132 yards to Hawthorne’s 95), the Hornets got it done where it mattered, mostly within Chiefland’s 10-yard line.

After an Indians turnover, Lawrence capped off a short drive with an 8-yard score with 3:38 remaining in the 1st quarter.

Jones took the reigns on Hawthorne’s next drive, carrying the ball for 20 of the 47 yards gained on the drive. He crossed the plain with 9:23 left in the 1st half.

An inefficient Chiefland drive late in the half gave the Hornet offense optimal field position. They started Lawrence’s 2nd scoring drive from their opponent’s 19-yard line.

After the half, a 39-yard reception by Nealy from Mackey was complemented by Jones’ final touchdown, this time from 5 yards. He put Hawthorne up 28-0 with more than 20 minutes left in the game, and that lead was never challenged by the Indians.

“…when your offense doesn’t put drives together, the defense is back out on the field tired,” said Ingram. “…I think tonight was one of those nights where we end up moving the ball and putting the drives together. The defense rests up, and then once they come back out, they’re fresh.”

Ingram admitted difficulty in choosing which of his two dominant backs to go with, but also credited his offensive line in opening up the holes for them to run, something his team has done well all season.

“Going forward, it’ll be something we’ll lean on most definitely.” 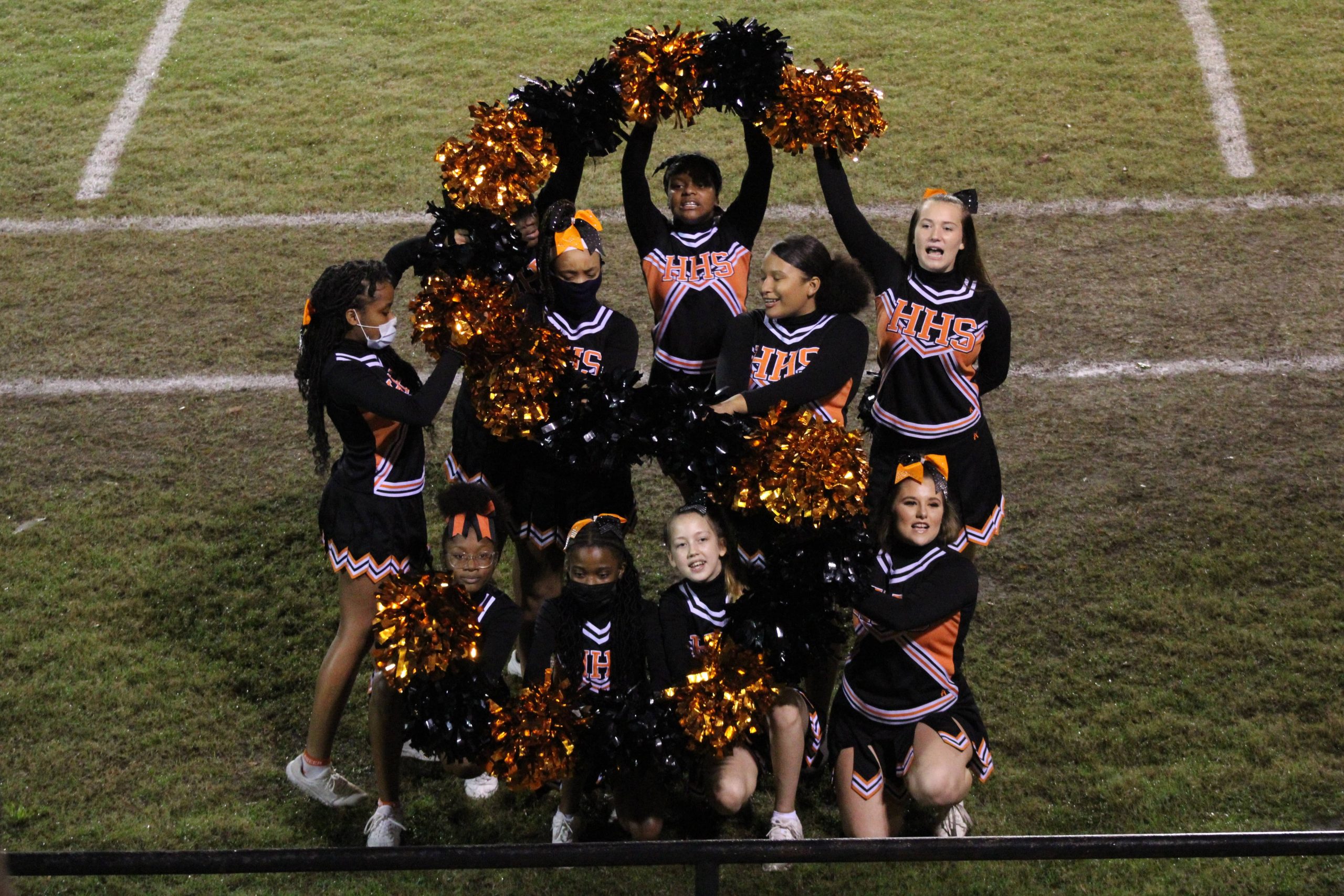 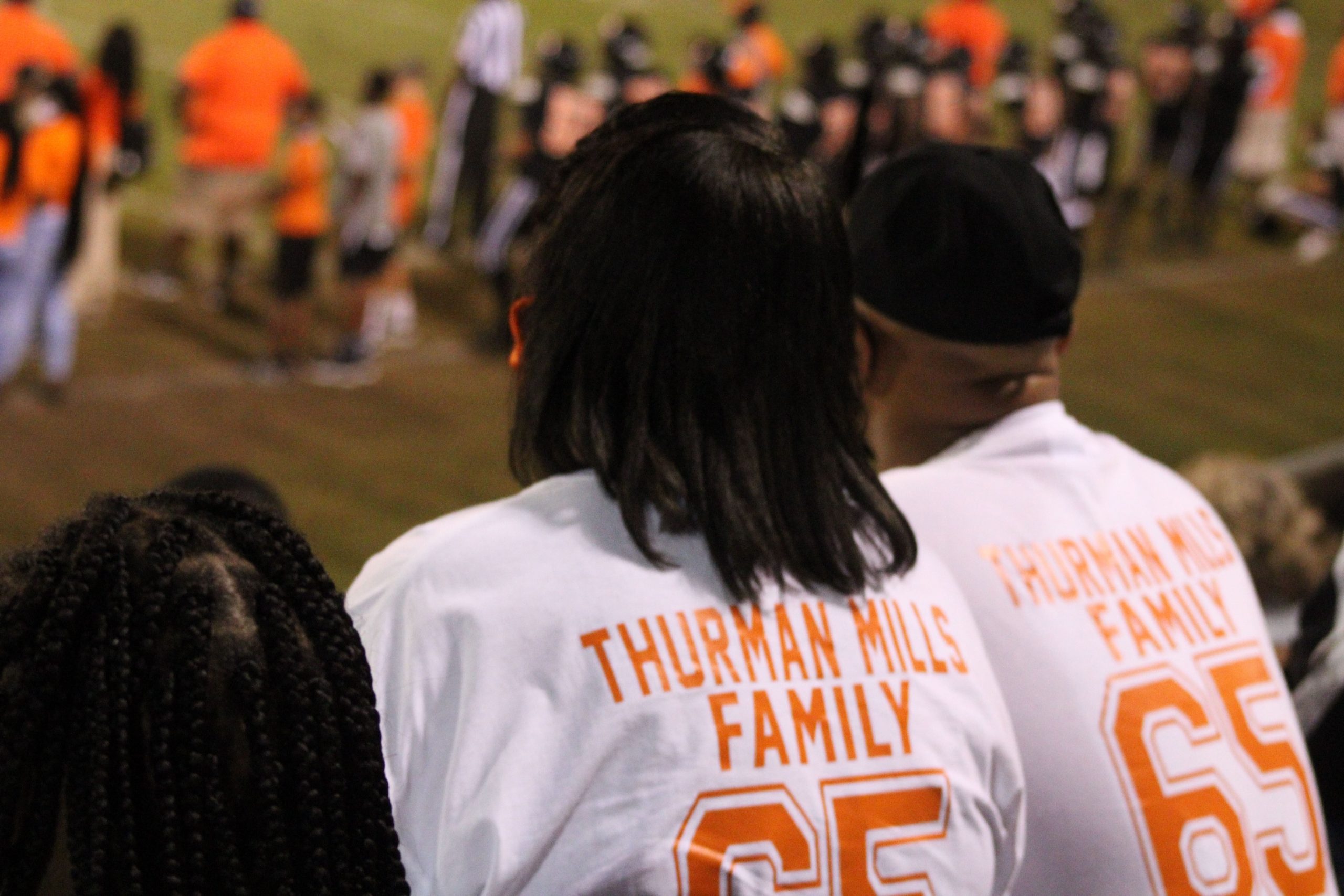 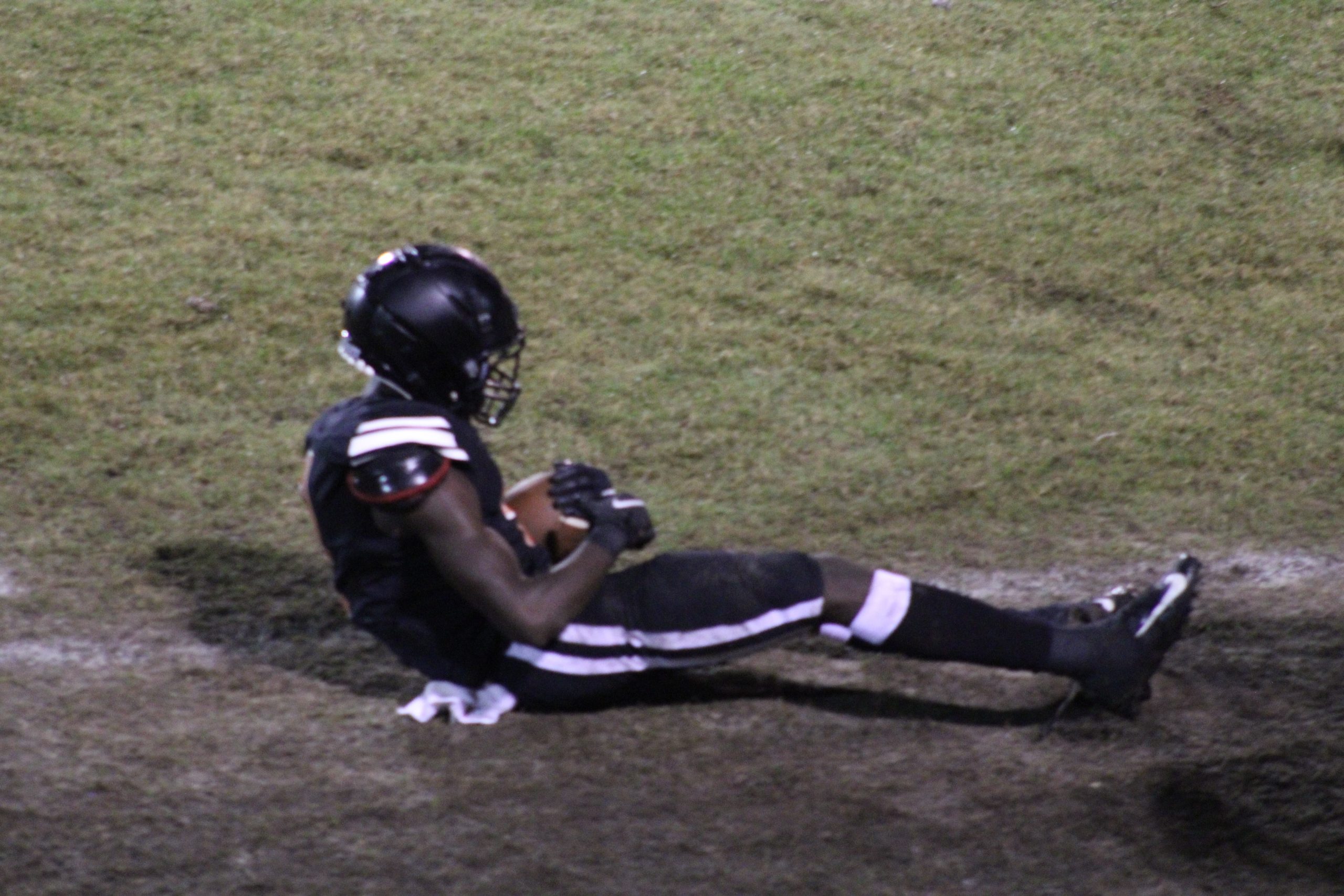 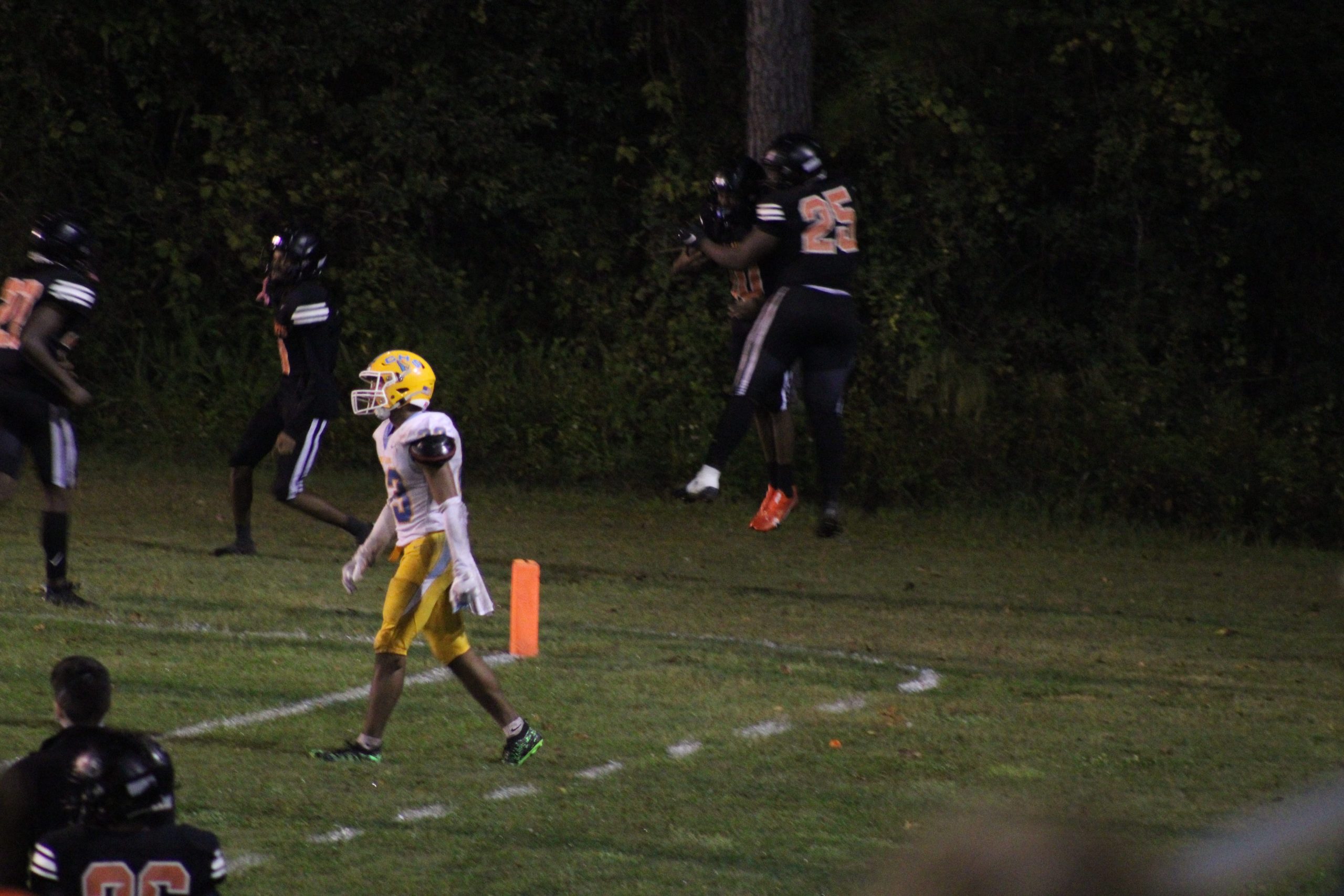 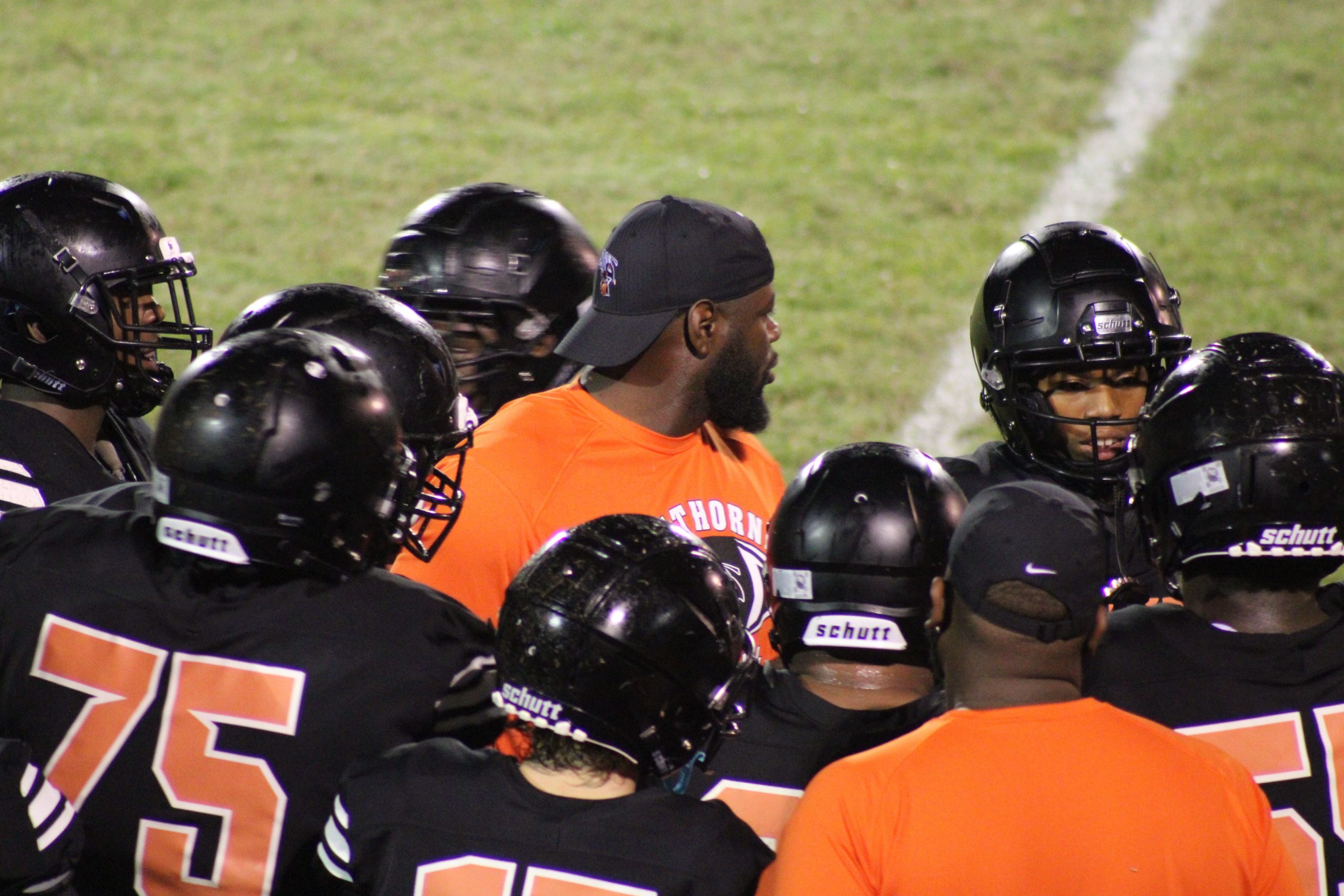 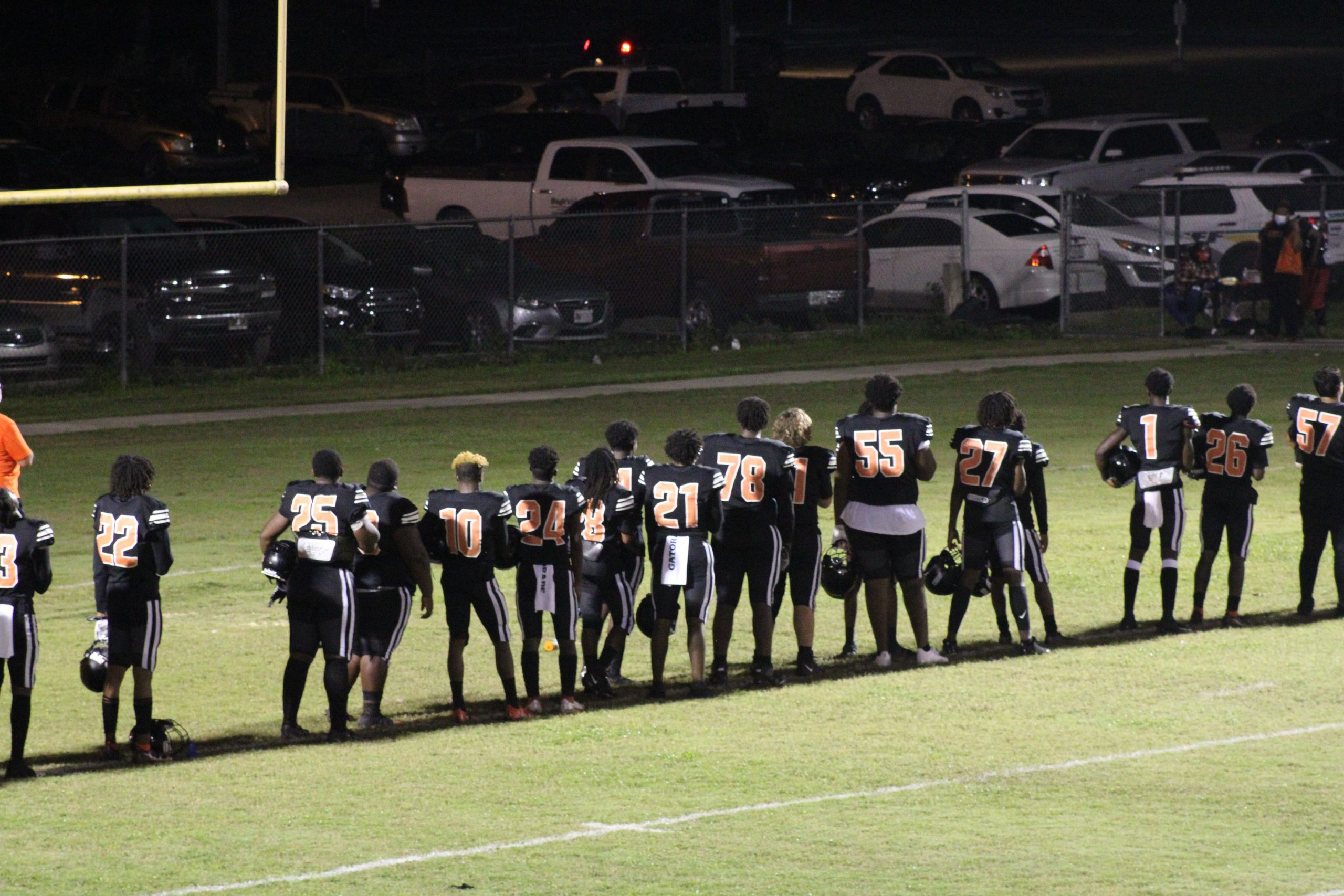 Chiefland mishaps on offense did not help their case in matching Hawthorne’s dominant offense. Part of that can be attributed to a dominant day for the Hornet defense. Led by sophomore Jailen Ruth, they brought down Chiefland ball carriers behind the line of scrimmage 7 times in the game.

In the first quarter alone, the Indians committed three fumbles. The first was recovered by the Chiefland offense who punted on the next play.

The second time they would not be so lucky, giving it up to Hawthorne who took advantage three plays later with Dre Lawrence giving them the first score of the game.

To end the 1st quarter, the Indians fumbled a third time, recovered, and punted three plays later with Hawthorne again scoring on their next drive. By then, the Hornets had raced out to a 14-0 lead and never looked back.

The fourth fumble happened in the 3rd quarter with Chiefland already down 28-0, ending one of their final drives of the season in a punt.

Now with their first win of the playoffs under their belt, Hawthorne will return home for a matchup with the winner of Williston and Fort Meade. That game kicks off at 6 p.m. tonight, and Coach Ingram’s staff will be attending to scout their potential opponent.

No matter who they end up playing (and when), there’s enough evidence in Hawthorne’s abilities out there for opposing teams to be on the lookout.

“I feel confident,” Ingram said. “I think we’re finally kind of putting it all together.”

Caleb Wiegandt is a first-year Journalism student on the Sports and Media track in the University of Florida's College of Journalism and Communications. He has previous bylines in USA Today, Yahoo Finance, and The Louisville Courier-Journal before arriving at ESPN Gainesville. Caleb is a proud graduate of Holy Cross High School in southwest Louisville, Kentucky, where he was born and raised. You can reach Caleb at cwiegandt@ufl.edu.
@@CalebWiegandt
Previous Vanderbilt Looks for First Win Against Kentucky
Next Mainland Holds On to Defeat Gainesville 24–21 in First Round of the Playoffs