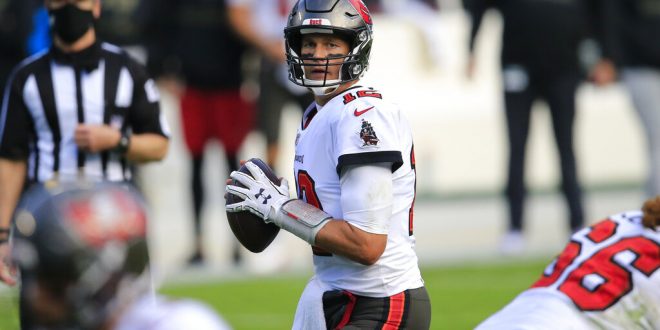 Buccaneers Cruise Past Panthers: A Successful Week For Florida’s Teams

Florida’s NFL teams, the Miami Dolphins, Tampa Bay Buccaneers and Jacksonville Jaguars, finished Sunday with a respectable 2-1 combined record. As a whole, the week should be seen as a tremendous success, despite Jacksonville falling short in Green Bay.

The Jaguars entered Sunday as double-digit underdogs against a stellar (6-2) Green Bay Packers squad. Jacksonville marched into Green Bay with a (1-7) record and a rookie sixth round pick Jake Luton starting at quarterback. Luton, a former Oregon State Beaver, was set to make just his second career start. It’s safe to say all odds were stacked against head coach Doug Marrone and his Jaguars team. Yet, Jacksonville fought hard and managed to claw their way to a lead midway through the fourth quarter.

Packers quarterback Aaron Rodgers proved too resilient and regained the lead with just over nine minutes left. Green Bay’s 10th-ranked defense finished off the Jaguars from there, as Green Bay held on to a 24-20 victory.

Despite the impressive effort Marrone was not thrilled with the result.

Maybe Jacksonville’s biggest bright spot this season continued to impress on Sunday. Jaguars undrafted rookie running back James Robinson finished yesterday’s game with 109 yards on 23 carries. This is Robinson’s third game this season with over 100 yards on the ground. The rookie from Illinois State ranks fifth in the NFL in total rushing yards this season with 689. The ground game is in good hands and has a very bright future ahead with the 22-year-old Robinson lugging the rock.

A Bounce-Back for the Buccaneers

Following, last weeks abysmal 38-3 defeat at the hands of the New Orleans Saints last Sunday Night, Tampa Bay aimed to bounce-back against another divisional foe. At (6-3), the Buccaneers traveled to Charlotte to face the (3-6) Panthers. Tampa Bay started slow, finding themselves down 14-7 after quarter one, and 17-10 late in the second. Buccaneers quarterback Tom Brady came alive in the second half, and Tampa’s prolific offense did not look back from there.

Brady finished with 341 yards passing and three touchdowns on 28 for 39 passing. Brady currently ranks fourth in the NFL in passing with over 2,700 yards this season. Tampa Bay outscored the Panthers 36-6 after trailing in the first half, en route to a dominant 46-23 victory. Now at (7-3), the Buccaneers find themselves just a half-game back of first place in the NFC South. However, they lose the head-to-head tiebreaker with first-place New Orleans, having already lost twice to the Saints.

Entering Sunday, many were excited for the rookie quarterback matchup set to take place in Miami. Dolphins signal caller, fifth overall pick Tua Tagovailoa, was ready to face the Chargers’ young gun-slinger, sixth overall pick Justin Herbert. Prior to Sunday, Herbert had thrown for 2,146 yards this season, the most ever for a rookie quarterback through his first seven starts. Yet, Los Angeles found themselves struggling to win games, traveling to Miami at (2-6).

The Dolphins, meanwhile, continued to help their rookie quarterback, coming into Sunday’s contest at (5-3) having won four straight games. The Dolphins’ fourth ranked scoring defense came alive once again, holding Herbert to a career-low 187 yards passing. Miami again found ways to help their offense in all three phases, blocking a punt early in the first quarter, and intercepting a Herbert pass in the game’s final frame.

The Dolphins are now (6-3) and sit just a half-game back of the Buffalo Bills for first place in the AFC East. A division dominated by the New England Patriots for the previous two decades has finally seemed to shift in power. Tagovailoa, wasn’t asked to do a ton, but once again did enough for his team to win. Tagovailoa now becomes just the second rookie quarterback in the Super Bowl era to win his first three starts without throwing an interception, joining Philadelphia’s Carson Wentz.

The Dolphins are the best team in the division https://t.co/0jzS7JAVj0

It won’t get much easier for the Jaguars next week, as they’ll host the NFL’s only unbeaten team, the (9-0) Pittsburgh Steelers.

Meanwhile, the Dolphins will look to continue their hot streak against a struggling (3-6) Broncos team in Denver.

Lastly, the Buccaneers will again be in primetime as they will host the (6-3) Los Angeles Rams on Monday Night.

Will Levenson is a Journalism and Sports Media major at UF. He produces daily shows for WRUF, including "Sport Scene with Steve Russell," "Harp on Sports," and "The Tailgate." In addition, Will provides weekly sports updates for WUFT News and radio Sportscenters for WRUF radio. Will has been a writer at ESPN Gainesville since September 2019.
@BigWillLevenson
Previous Bears, Vikings NFC North Showdown on Monday Night Football
Next Mullen talks improving each week, Vanderbilt