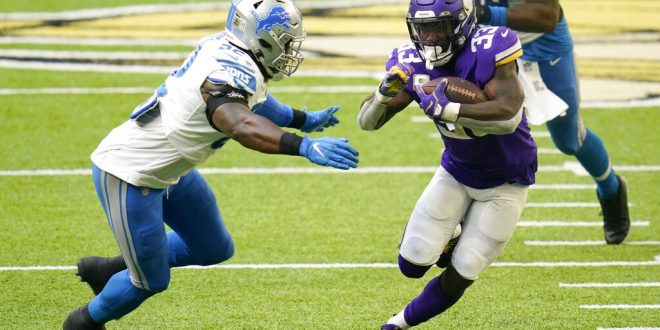 The (5-4) Chicago Bears welcome the (3-5) Minnesota Vikings for Monday Night Football at Solider Field. With Aaron Rodgers and the Green Bay Packers sitting a top the NFC North, both teams are looking to tighten the race in the division.

Bears’ head coach Matt Nagy understands the urgency behind winning a division game like this one.

The Vikings have had anything less than a stellar first half of the season. However, after starting the season 1-5, Minnesota is making the necessary adjustments to regain their momentum.

Coming off of two straight victories over the Packers and Detroit Lions, the Vikings have found a rhythm. Specifically, Minnesota has found success against their NFC North opponents.

Vikings’ head coach Mike Zimmer notes all the adjustments the team has made throughout the season. However, Minnesota is beginning to settle in offensively.

Zimmer notes Minnesota is finding the most improvement in their run game. Running back Dalvin Cook is instrumental in the newfound success of the Vikings run game. Cook currently sits second in the league with a total 858 rushing yards.

Dalvin Cook is 6th player in NFL history and the 1st since Emmitt Smith in 1994 with a Rush TD in each of his first 7 games of a season.

Furthermore, the Vikings currently sit fourth in the league overall for rushing yards per game with 160.4.

Although the Vikings are coming in as three point underdogs, quarterback Kirk Cousins is looking to get his first career victory over the Bears. When it comes to prime time, Cousins has struggled. The quarterback has yet to win a Monday Night Football game during his career, going 0-8.

Cousins has thrown for 15 touchdowns and 1,855 yards this season.

In order for Minnesota to improve to 4-5, the Vikings will have to get the ball to Cook. Cousins will need to play his best and make plays to his multitude of Minnesota receivers.

The Bears enter this matchup on a three game losing streak. Quarterback Nick Foles and company will hope home field advantage can shift the course of the season.

In late September, the Bears officially passed the reigns from quarterback Mitchell Trubisky to Foles hoping to spur the offense. Since taking over as starter, Foles and the Bears post a 2-4 record. Foles has thrown for 10 touchdowns and 1,746 on the season.

Defensively, the Bears have been able to get it done. Chicago has held opponents to an average of 335.1 yards per game, ranking them ninth in the league.

Bears linebacker Khalil Mack was voted Midseason Defensive Player of the Year by FOX NFL fans. Mack leads the Bears with six and half sacks, two forced fumbles and 33 tackles this season.

We asked and you voted…

The Midseason Defensive Player of the Year is @ChicagoBears LB Khalil Mack, as voted on by the NFL on FOX fans! #DaBears pic.twitter.com/bp9fpeNanP

According to Bears head coach, Nagy, Chicago will need to be on the lookout for the Minnesota defensive line.

For a Chicago win, the Bears defense is going to have to put pressure on Minnesota offensive line and slow the Vikings’ run game. Foles and the Bears offense will need to be able to recognize the strength of the Minnesota defensive line and make the necessary adjustments to keep pressure off of Foles.

A win for Chicago could put them within one game of leading the division.

Previous Williston Red Devils Say Goodbye to the 2020 Season
Next Buccaneers Cruise Past Panthers: A Successful Week For Florida’s Teams