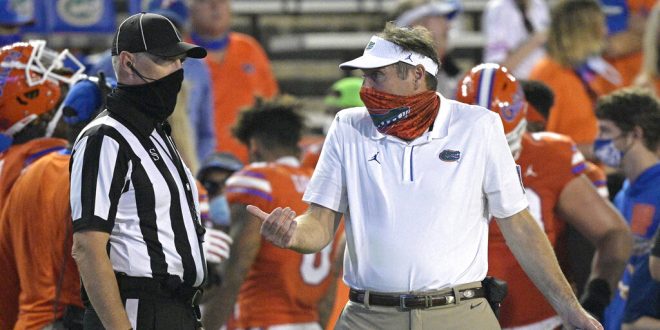 Florida coach Dan Mullen, right, questions an official about a penalty during the second half of the team's NCAA college football game against Arkansas, Saturday, Nov. 14, 2020, in Gainesville, Fla. (AP Photo/Phelan M. Ebenhack)

Florida Gators head football coach Dan Mullen stresses the same idea each week. Improving as a team will lead to more wins, regardless of the opponent. Such is the mantra ahead of a road trip to Nashville to play the winless Vanderbilt Commodores.

Improving on both sides of the ball

It is safe to say that this Florida offense is fun to watch.

Kyle Trask, Dameon Pierce, Malik Davis, Trevon Grimes, Keon Zipperer and Jacob Copeland all had a great game against Arkansas. Imagine what could have been with a healthy Kyle Pitts.

Critics of this Florida football team have one place to look: the defense. However, despite what the numbers may seem, Florida’s improving defense is vastly greater than what they were early in the season.

Fans see Todd Grantham’s “aggressive” style of defense and get frustrated when Florida gives up long third down conversions. However, Mullen says his defensive staff do well to make adjustments to get after the quarterback.

Mullen is right. Florida leads the SEC in sacks with 19. However, Grantham’s defensive squad ranks ninth in the SEC in terms of yards allowed per game with over 411. Similarly, the Gators give up 30 points per game, which is middle of the pack. Perhaps Florida fans are used to the dominating defenses that carried this team to victories early in the decade, rather than a mid-tier defense and a high-octane offense.

While everyone loves watching Trask zip the ball around the field and find the end zone at least four times a game, Mullen says they can still improve. Mullen has claimed all season that championship teams are teams improving each week.

Vanderbilt, Florida’s next opponent, brings a different feel to the table.

A struggling Commodores side

Vanderbilt is not a football school, and it is tough to see their team berated by schools like Florida, Georgia, LSU and Alabama each week. The Commodores sit at 0-6 on the season, and are unsurprisingly last in the SEC East.

While the old adage goes “you’re only as good as your record,” it is hard to stick that onto Vanderbilt. As Mullen explains, they play up to their competition each week, including teams like Texas A&M and Kentucky.

Florida’s last visit to Music City was troublesome. Trailing by 18 early in the first half, Florida clawed their way back to win by 10. Florida may have beaten Vanderbilt 56-0 in 2019, but we’re not in Gainesville. In fact, the 11 a.m. local-time kickoff and only 1,000 family members in Vanderbilt Stadium could be weary for a Gator team riding the confidence of two significant wins.

Mullen wants his Gators to come out with tempo and energy this week.

Florida will be without star tight end Pitts for the second straight game as he nurses a concussion. Still, if we want to build on the improving mentality, Trask’s options for passing show that the receivers are all stepping up to new roles.

Florida will have to employ the same use of receivers to beat Vanderbilt. And, perhaps this is the best opportunity for the defense to flex their muscles and show how they are improving. Vanderbilt has the fourth-lowest yards per game, and they are last in points per game in the SEC.

Originally from Seminole in the Tampa Bay area, Kyle is a contributor for ESPN Gainesville as well as local NPR and PBS affiliate WUFT. Kyle wants to get into sports with a lofty dream of being a sports broadcaster. He was raised playing soccer and baseball while watching hockey and football, so the knowledge about various sports is fairly extensive.
@KyleFanslerUF
Previous Buccaneers Cruise Past Panthers: A Successful Week For Florida’s Teams
Next The NFC West is a tight race as Week 10 comes to a close