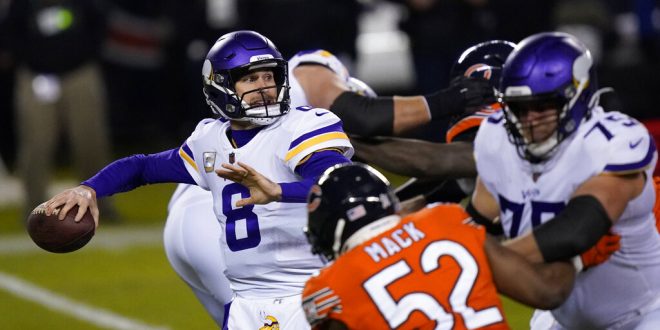 The Minnesota Vikings extend their winning streak to three after defeating the Chicago Bears 19-13 last night. The Vikings are now 4-5 this season and hold the third position in he NFC North.

Chicago also has a streak of their own, but the type of streak one would want to break. They have now lost four games in a row, and are 5-5 in the season.

The low-scoring game showed inconsistency from both teams. Defense and special teams played a big role for both teams.

This win helps the Vikings make their way into possible playoff contenders. They have been able to do this after a 1-5 start to their season.

Minnesota’s win over the Bears was also Vikings quarterback Kirk Cousin‘s first Monday Night Football Win. This snaps an 0-9 streak, a league-worst start to his career.

Tyler Bray replaced Foles but was only able to complete one of his five passes for 18 yards.

Despite not having a consistent play-calling and proper execution offensively, the Vikings were able to complete important plays that gave them the win.

One of those plays was in the third quarter. The Vikings were down by six when Justin Jefferson caught a 54-yard pass from Cousins that set up the Vikings to tie the game at 13.

Another big play was early in the fourth quarter when the Vikings were still working on getting the lead. Minnesota started at their own 37-yard line and were able to go 67 yards in five minutes. The five minutes concluded with a touchdown pass to Adam Thielen that gave the Vikings the lead.

Cousins recognized the importance of the pass game during this match.

Play of the game

Despite their loss, the Chicago Bears deserve a shoutout for the play that gave them the lead during the third quarter. Cordarelle Patterson made a 104 yard return to the endzone. What made this touchdown extra sweet for Patterson was the fact that his original NFL team was the Vikings after getting drafted by them in 2013.

The Vikings will try to extend their winning streak on Sunday when they host the Dallas Cowboys. Kickoff for this match is set for 4:45 pm.

On the other hand, the Bears will take a bye week. They will return November 19th when they go on the road to face Aaron Rodgers and the Green Bay Packers.

Camila is a senior at the University of Florida, who served as a beat writer for the women's basketball team from 2019 until the 2021 season. She was also a beat writer for the Gators football team during the 2020 season. Camila is also WUFT's news director as well as a sports reporter/anchor.
@CamilaMaffuz
Previous The NFC West is a tight race as Week 10 comes to a close
Next Guard Lavender Briggs Looks to Lead Florida Women’s Basketball 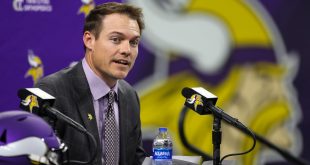 Vikings Look Towards The Future With New Coaching Hire