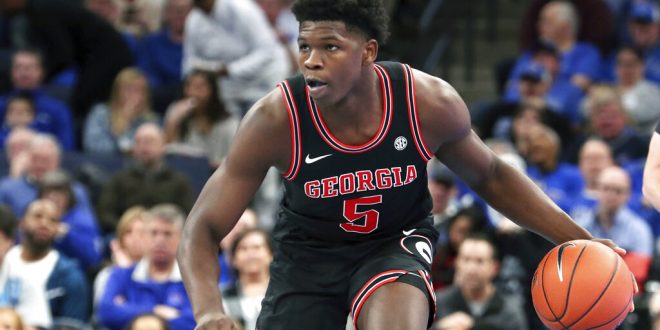 FILE - In this Jan. 4, 2020, file photo, Georgia's Anthony Edwards (5) looks to pass the ball during the second half of the team's NCAA college basketball game against Memphis in Memphis, Tenn. The Minnesota Timberwolves selected Edwards with the first pick in the NBA draft Wednesday, Nov. 18. (AP Photo/Karen Pulfer Focht, File)

After a long wait, the 2020 NBA draft has finally arrived.

The first three picks went mostly as expected but after that trades and big jumps in the projected order led to chaos.

The Pick is in…Top Three

With the number one pick, the Minnesota Timberwolves had a lot of talent to choose from. And they chose to take Anthony Edwards, a shooting guard from Georgia. He averaged 19.1 points per game at Georgia and was the SEC Freshman of the Year. A 6’5″ guard, Edwards has the physical attributes to become an All-Star and is blesses to be where he’s at.

James Wiseman was the number two pick and went to the Golden State Warriors. Wiseman only played three games during his time at Memphis, but he still walked away as the number two pick. Wiseman chose to enter the NBA Draft right away after receiving a suspension for receiving improper benefits from Memphis coach Penny Hardaway. However, it all seemed to work out pretty well for him and he says overcoming the adversity only made him stronger.

The Charlotte Hornets rounded out the top three picks by selecting LaMelo Ball. He played for two different high schools in the United States, Chino Hills and 2 Academy, as well as two foreign teams, BC Prienai in Lithuania and the Illawarra Hawks in Australia. A 6’7″ point guard, Ball has unmatched passing skills that will aid the Hornets well.

Big Trades of the Night

The Philadelphia 76ers unloaded starters Al Horford and Josh Richardson while picking up Danny Green and Seth Curry. The Richardson-Curry trade was one of the biggest trades of the night as the Mavericks and 76ers traded starting guards. Horford, the former Gator, will be headed to the Thunder.

The Clippers picked up Luke Kennard in a three-way deal that sent Landry Shamet to the Nets. Ricky Rubio is headed back to the Timberwolves in a trade that gave the Thunder the 17th pick.

At the fifth overall pick, the Cleveland Cavaliers selected Issac Okoro out of Auburn. In college, he made his way as one of the best collegiate defenders and has the size, strength and length to make it in the NBA.

The SEC had a pair go back to back in picks number 13 and 14 in Kira Lewis Jr. to the Pelicans and Aaron Neysmith to the Boston Celtics. Out of Alabama, Lewis Jr., although just 6’3″ and 165 pounds, made his name by being one of the fastest players in the draft. Nesmith shot over four 3-pointers a game at Vanderbilt while also being impressive in size at 6’6″ and 213 pounds.

The 76ers used the 21st pick to select Tyrese Maxey out of Kentucky. One of Maxey’s strongest attributes is his knowledge of the game and ability to play either backcourt position.

Just four picks later, Kentucky would have another draft pick in Immanuel Quickly, selected by the New York Knicks. Quickly won SEC Player of the Year honors in his sophomore season averaging over 14 points per game and 4.6 rebounds.

Saban Lee out of Vanderbilt was chosen by the Detroit Pistons in the second round at pick 38. Lee has terrific ball-handling ability and body control while also being one of the fastest people on the court.

The Sacramento Kings selected Robert Woodard II out of Mississippi State at pick 40. Woodard’s biggest strength is in his defense, being able to guard positions 1-4.

Kentucky would get their third pick of the night in Nick Richards who was selected at number 42 by the Hornets. Richards has impressive physical tools that come in handy on defense at 7 feet tall and 247 pounds.

The 76ers selected Isiah Joe out of Arkansas as pick 49. While he only made 34% of his three point shots during his sophomore season, Joe attempted an impressive 10.6 three balls a game.

The last two picks of the night for the SEC came in Skylar Mays from LSU at pick 50 and Reggie Perry from Mississippi State at pick 57. The Atlanta Hawks will get a big talent in Mays who shows strong defensive skills and a versatile offensive game. The Nets picked up Perry who has the ability to score big points in the paint, averaging 17. 4 points per game in his sophomore season.