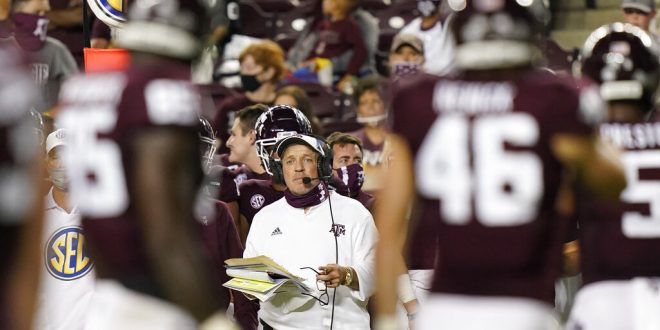 FILE - Texas A&M coach Jimbo Fisher watches from the sideline during the second half of an NCAA college football game against Vanderbilt in College Station, Texas, in this Saturday, Sept. 26, 2020, file photo. The SEC came into this season with a contingency plan to deal with coronavirus-related issues. While those plans have been severely tested as the pandemic has wreaked havoc, Southeastern Conference officials continue adapting to navigate setbacks in their pursuit of a league title and possible national championship. “Life is about changes,” Texas A&M Jimbo Fisher said. “It’s about adaptation. It’s about making the best out of situations.”(AP Photo/David J. Phillip, File)

Texas A&M Has to Sit–Again

It is the second-straight week the Texas A&M Aggies have had to sit out due to ongoing covid-19 issues. An astonishing four SEC games were postponed due to positive tests last weekend, and the Aggies’ program continues to struggle.

“Candidly, the numbers around contact tracing … have emerged as one of our biggest challenges to playing,” SEC commissioner Greg Sankey said last week.

Several players on the Aggies tested positive last week, and more are out due to contact tracing. This dropped them below the 53-player threshold to fill a roster.

The SEC has not announced a makeup date for this week’s postponed game against Ole Miss yet. Last week’s matchup versus Tennessee has been rescheduled for Dec. 12th, the conference’s built-in bye week.

The SEC also announced last week that Dec. 19th, the day of the SEC Championship, can be used as a second makeup weekend for teams that do not participate in the title game.

The Aggies boast an overall 5-1 record and are on a four-game winning streak despite all the struggles they’ve endured.

Their next game is set for Nov. 28th at home against LSU. The game will air on ESPN.