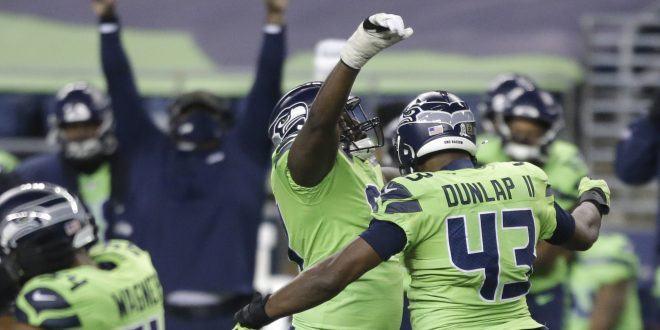 And in a game that many likely expected to explode into a shootout — like the teams’ week seven matchup — it was actually the Seahawks’ defense that clinched the victory.

After containing the explosive Cardinals’ offense for most of the night, the Seahawks harkened back to their “Legion of Boom” days.  And in doing so, they appeared to signal that they’d be ready to complement Russell Wilson and the offense on a potentially deep playoff run.

After getting the ball with two minutes and 19 seconds to go, Kyler Murray was tasked with leading the Cardinals on a 79-yard touchdown drive to even the score at 28.

And it appeared that he would deliver.

With first-and-10 on the Seahawks’ 27-yard line, Murray was inching closer to yet another fourth-quarter comeback.

To that point, he had led the offense 52 yards down the field and had completed four of his five passes for 41 yards on the drive.

But after three consecutive incompletions, Murray and the Cardinals faced a lengthy fourth-down scenario.

On fourth-and-10 with 38 seconds remaining, the Seahawks dropped eight defenders into coverage while rushing three. And despite the conservative choice in pressure, Former Florida Gator Carlos Dunlap broke free.

After bursting past Cardinals’ right tackle Kelvin Beachum, Dunlap chased down Murray, wrapped him up and tossed him to the ground.

With his second sack of the night, Dunlap — who was traded to Seattle three days after the first Cardinals-Seahawks match-up — iced the game.

In the three games since that trade, Dunlap has accumulated three sacks, four tackles and two tackles for loss.

His presence on the pass rush could be a temporary solution to the struggles that the Seahawks have endured while defending the pass this season.

And despite the injuries that have left the Seahawks’ secondary decimated, the pass defense is much improved.

In the last two games, Seattle has held the Bills and Cardinals to 220 and 182 passing yards, respectively. That is well below the Seahawks season-average on pass-defense, and it could be a positive sign for things to come.

Entering the game riding high after their improbable win over the Buffalo Bills in week 10, the Cardinals were largely contained by the Seahawks defense.

Seahawks Offense Relies on the Run

Simply put, the Cardinals struggled to establish the run with just 57 yards on the ground.

The Seahawks had no such issue.

In total, the Seahawks accumulated 165 yards on the ground. And that was crucial because Russell Wilson only threw for 182 yards on 23-of-28 passing.

Wilson contributed two touchdowns through the air, but Wilson’s big arm was not needed much to beat the Cardinals Thursday night thanks to a dominant ground performance.

With the win, the Seahawks improve to 7-3 on the season, while the Cardinals fall to 6-4 in defeat.

The Seahawks are set to play the Eagles, Giants, Jets and Washington Football Team over the next four weeks. Combined those teams hold an 8-28-1 record.

They’ll then close out the regular season with divisional match-ups against the Rams and 49ers.

The Cardinals begin their season-ending six-game stretch with a road match-up against the New England Patriots. The games that follow include two tilts with the Rams and games against the Giants, 49ers and Eagles.