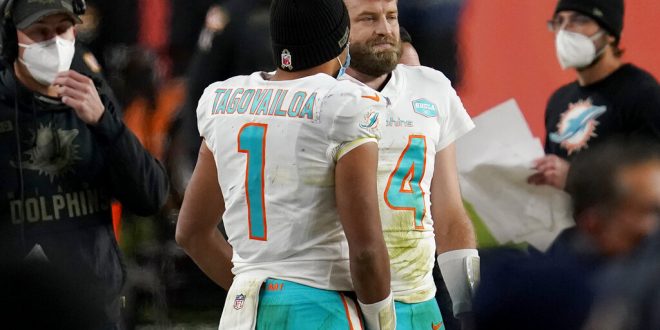 Tagovailoa benched in Dolphins 20-13 loss to the Denver Broncos

The Denver Broncos defense exposed the Miami Dolphins as fish out of water during Sunday’s matchup in Denver. Melvin Gordon III and Phillip Lindsey ignited for the Denver offense as the Dolphins could not find an answer to stop the dynamic duo.

A Close First Half

Dolphins took the first lead of the game, 7-0.

Lindsey picked up the slack for the Broncos offense while Lock continued to struggle. The Broncos eventually reached the edge of the end zone as Gordon broke through the defense for the touchdown.

Lock began to find his rhythm, connecting with wide receiver Tim Patrick to put the Broncos within field goal range. Brandon McManus set the Broncos up to take the lead, knocking in a 29-yard field goal. Denver overtake the Dolphins, 10-7.

Tagovailoa continued to connect with Parker, securing the ball and moving the chain for another first down. Dolphins kicker Jason Sanders made a 41-yard field goal to tie up the game. However, wide receiver Jerry Jeudy made an impressive catch from Lock allowing the Broncos to set up for another field goal. The Broncos ended the first half up, 13-10.

The Broncos defense continued to impress as they held the Dolphins away from scoring in the third quarter. Gordon breaks free from the defense again to score a 20-yard rushing touchdown.

Miami quarterback Ryan Fitzpatrick took the pressure away from Tagovailoa as he subbed in for the rest of the game. Tight end Mike Gesicki and running back Salvon Ahmed helped bring the Dolphins into field goal range. Sanders made the much needed 53-yard field goal to bring the Dolphins closer to the Broncos. Broncos lead the game, 20-13.

Fitzpatrick had a chance to set up the game winning touchdown pass to to Parker. However, Fitzpatrick’s pass was intercepted by Broncos safety Justin Simmons in the end zone securing the Broncos victory.

Up Next For the Dolphins

Miami looks to end the month of November on a winning note. Miami will travel to New York to face the Jets at the MetLife Stadium this Sunday.