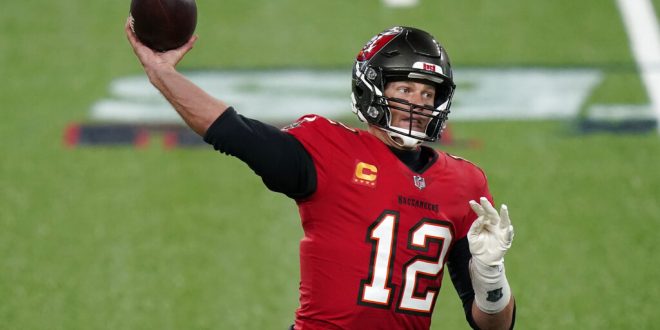 Tampa Bay Buccaneers quarterback Tom Brady throws during the first half of an NFL football game against the New York Giants, Monday, Nov. 2, 2020, in East Rutherford, N.J. With the NFC East a total mess, the conference's West Division is so strong that three teams, possibly all four, figure to challenge for the playoffs. (AP Photo/Corey Sipkin)

Monday Night Football is an NFC showdown this week as the Los Angeles Rams take on the Tampa Bay Buccaneers.

The outcome of the matchup between the Rams and Bucs affects seeding in the race for the NFC. A win for the Rams would put them at a tie for first place in the NFC West division, while a Buccaneers’ victory would narrow the existing gap between them and the NFC South-leading New Orleans Saints.

With four divisional matchups remaining on the schedule, the Rams control their quest for post-season football. However, the path to the playoffs is a little more difficult for the Bucs, who have lost twice to the Saints.

Quarterbacks Tom Brady and Jared Goff will face off for the third time. They’ve split the series 1-1, with Goff and the Rams taking the first matchup and Brady and the Patriots winning the second.

In addition, the two players match up well on paper. They have similar passing statistics according to ESPN. Goff has thrown for 2,447 yards on the season, while Brady has a slight edge with 2,739 yards. However, Goff takes the crown on interceptions, he has thrown six picks to Brady’s seven.

“Every day of my life I’ve been thinking about an opportunity like that,” he said.

Not only will he get his chance, but his unit will pose a challenge for the veteran quarterback. The NFL’s top ranked defense allows an average 296.4 yards and 18.7 points per game.

Bucs QB Tom Brady is 43, and on Monday he will face a Rams team that has a head coach (Sean McVay, 34), defensive coordinator (Brandon Staley, 37) and offensive coordinator (Kevin O'Connell, 35) all at least five years younger than he is. This has to be a first, right?

History to be made

The Monday Night Football game will feature the league’s first all-black officiating crew. Putting together such a crew allows the league to “recognize [its] history and recent practices in diversifying its officiating department,” according to an ESPN article. Members of the officiating team include:

“I am proud of my heritage and excited about my participation in this historic game.” – Jerome Boger to ESPN on what being a part of the game means to him

This is not the first time the league has made history during 2020. Earlier in the season, the Washington-Cleveland game featured a female coach on each sideline and a female official.

Previous Tagovailoa benched in Dolphins 20-13 loss to the Denver Broncos
Next Around the SEC: Auburns Sprints Past Tennessee, JT Daniels Shines