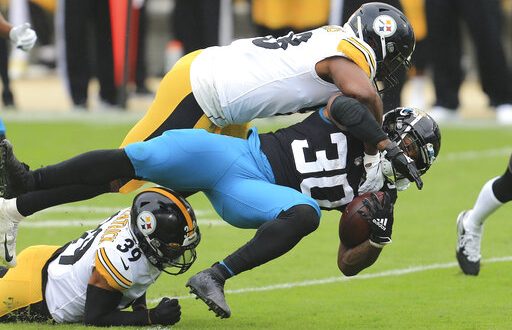 The Jacksonville Jaguars lost again on Sunday. This time at the hand of the undefeated Pittsburgh Steelers 27-3. It’s the Jags ninth straight loss since its opening week win over the Indianapolis Colts.

The Jaguars’ quarterback Jake Luton had his worst game since becoming the starter in place of injured Gardner Minshew. Luton threw four interceptions and only passed for 151 yards. Pittsburgh’s Minkah Fitzpatrick and Terrell Edmunds each had two interceptions on Sunday afternoon.

Jacksonville head coach Doug Marrone talked about Luton’s day, and what the Steelers did to make him have such a tough day.

The Jags offense hasn’t been great this season, but once Minshew went out, it got even worse. The Jags only managed 206 yards of offense and picked up a mere 14 first downs on Sunday. Jacksonville running back James Robinson was the only highlight on offense as he rushed for 73 yards and had 21 yards receiving. However, the Jaguars need some kind of spark on offense and it can’t come from one player.

Marrone also said Robinson is a bright spot on the team. It’s tough to use Robinson the way the Jags want when they are constantly playing from behind, but Marrone said he likes his effort and he will always get the most out of all of his touches.

With the losing record, rumors are swirling about Marrone’s future. Luton talked about this and said he and his teammates love playing for Marrone.

Looking forward to next week

The Jags will remain at home next Sunday. They will take on the (7-3) Cleveland Browns. The Browns are off to their best 10 game start since reentering the league in 1999, and will look to remain hot against the Jaguars. It will be a tough finish for the Jags. Five of the last six opponents on the Jags schedule have a record of .500 or better.