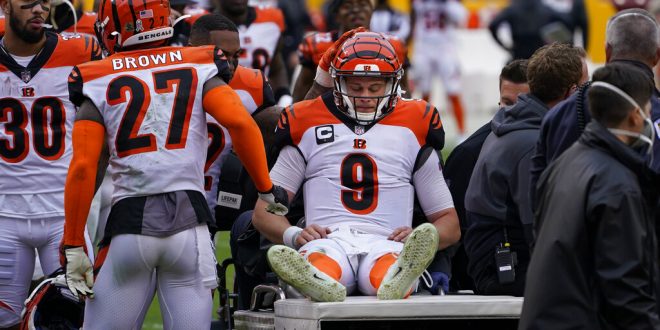 Cincinnati Bengals quarterback Joe Burrow (9) is consoled by teammates as he is carted off the field during the second half of an NFL football game against the Washington Football Team, Sunday, Nov. 22, 2020, in Landover. Burrow was carted off the field with a left knee injury. (AP Photo/Susan Walsh)

Other notable highlights from Week 11 in the NFL include a couple overtime games. In addition,  New Orleans Saints quarterback Taysom Hill made his debut with Saints.

Burrow will not play the rest of the 2020 season after tearing his ACL and MCL. Moreover, he has other structural damage all on his left knee.

Joe Burrow’s MRI revealed a torn ACL, MCL and other structural issues in the QB’s knee, per @AdamSchefter and @Ben_Baby pic.twitter.com/8KNAwGYgZE

Burrow was playing well for his rookie season. Through his first ten games, he had 2,688 passing yards and 16 total touchdowns. After Sunday’s loss, the Bengals are 2-7-1.

Backup quarterback, Ryan Finley, had three completions for 30 yards and an interception.

He said the objective is to win games no matter who they are starting at quarterback.

The Baltimore Ravens and the Tennessee Titans met for the first time since last year’s playoff game in which Titans’ running back Derrick Henry ran for 195 yards.

Ravens quarterback Lamar Jackson threw for 186 yards, a touchdown and an interception. Toward the end of regulation, the Titans’ defense held back the Ravens forcing them to kick a game-tying field goal instead of reaching the end zone.

Through the first half Henry was mostly shut down only having 36 yards on 13 carries. However, in overtime Henry broke free for a 29 yard game-winning touchdown.

The Ravens’ (6-4) next game is against the Pittsburgh Steelers (10-0) on Thanksgiving.

Another game that went into overtime was the Green Bay Packers against the Colts. Both Philip Rivers and Aaron Rodgers played well. Rodgers threw for 311 yards, three touchdowns and one interception.

Moreover, Rivers had a similar game with 288 yards, three touchdowns and an interception. Rivers said playing against Aaron Rodgers at this age is special.

The game was decided in overtime with a 39-yard field goal by Rodrigo Blankenship. The Colts won 34-31.

After Drew Brees was placed on injured reserve due to his rib injury, it was up in the air as to who would start at quarterback for the Saints.

Before the game, head coach Sean Payton said he would do what he felt was best for the team.

Hill had a good start throwing the ball for 233 yards and rushing for 51 yards and two touchdowns. Along with the defense playing well, the Saints defeated the Atlanta Falcons 24-9.

It will be interesting to see how Hill and the Saints (7-3) play in the next game against the Denver Broncos (4-6) on Nov.29.