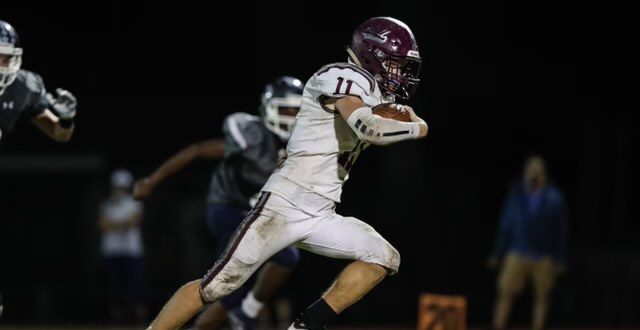 It is not common that a football team turns one of their wide receivers into the starting quarterback. It is even less common for a brand new starting quarterback to then lead his team to an undefeated record at home, and take them to a state championship appearance. Nonetheless, Oak Hall senior Andrew Pickens defied the odds and turned his teams’ season into one that was anything but common.

Growing up as an Oak Hall School student, Pickens was not always the football star that he turned out to be. Regardless, he was still an incredibly athletic child, which meant the seeds for success had already been planted.

“Andrew was a year-round travel baseball player until the spring of 7th grade when he decided that he wanted to go out for middle school football,” Andrews’ Mother Rose Pickens said. “Andrew is a natural athlete and is very competitive so it’s not all that surprising that he has excelled like he has.”

We Need a QB

After starting football, he became a wide receiver for the Eagles. However, this all changed before his senior year, when he was asked to switch to being the starting quarterback due to other players transferring. Pickens took the change in stride and was ready to become whatever he needed to be for the team.

“We needed someone with football I.Q. and athleticism since we were changing from a spread offense to the single wing and Andrew selflessly took on that duty,” Head Coach RJ Fuhr said. “He handled it better than most. When I came to him his response was, ‘Whatever the team needs coach.’ That says it all right there.”

While many players might take months to adapt to the new position and the responsibility that comes along with it, Pickens had a more seamless transition. He was ready to be the starter by the first game, and his comfort at the position showed on the scoreboard.

“It didn’t take me very long [to adjust to the position of] quarterback, probably a couple weeks,” Pickens said. “My line and running backs made me feel very comfortable in the offense and I played quarterback a little bit my freshman year.”

“It’s been a lot of fun seeing Andrew’s growth since 7th grade both on and off the field. He has turned into a great leader.”-RJ Fuhr

A Season to Remember

Pickens and his team raced out of the gate this season, winning in dominating fashion and outscoring their first five opponents 228-56. As for Pickens, he launched an incredible season as well, ending the season with 715 rushing yards and 14 total touchdowns. Despite his team coming up short in the state championship game against All Saints’ Academy, Pickens led Oak Hall to an undefeated record at home.

“My team has meant so much to me this season, I love all the guys so much,” Pickens said. “We went through a lot this offseason, but they all accepted the challenge and played incredibly well all year and I could not have asked for a better group of guys to play with.”

Behind every great player is a great coach, and Pickens has had Fuhr to look up to for his entire playing career. As he now leaves Oak Hall, the lessons instilled by Fuhr will help him along the way.

“Coach Fuhr has been a huge mentor for me,” Pickens said. “He was my coach the whole time I played, and we went through a lot, with the coaching change my sophomore year and my teammates transferring after my junior year. He was the best coach I could ask for and I appreciate everything he’s done for me to help me grow both as a football player and more importantly as a person.”

Pickens had quite a few hurdles to surpass to get the Eagles to where they were aiming to go: the state championship. With the help of his team, featuring two stand-out running backs in junior Carter Coleman and sophomore Jalen Scott, Pickens was able to get them to Lakeland for the game they had circled on their calendars. Even though they lost the final game, Pickens now has a legacy at Oak Hall to hang his hat on.

“I’ve gained so much mental fortitude from football, and the relationships I’ve made with my coaches and teammates will last a lifetime,” Pickens said. “Football is the best sport to prepare for real-life because there are ups and downs in every game and you have to be tough to get through it.”

Carson Cashion is a first-year student at the University of Florida, and has a major in journalism- sports and media. Originally from the Orlando area, Cashion covers the UF Gymnastics Team, having formerly covered Oak Hall Sports.
Previous Week 11 in the NFL: Joe Burrow suffers season ending injury, Taysom Hill debuts with Saints
Next Buccaneers Fall 24-27 Against LA Rams